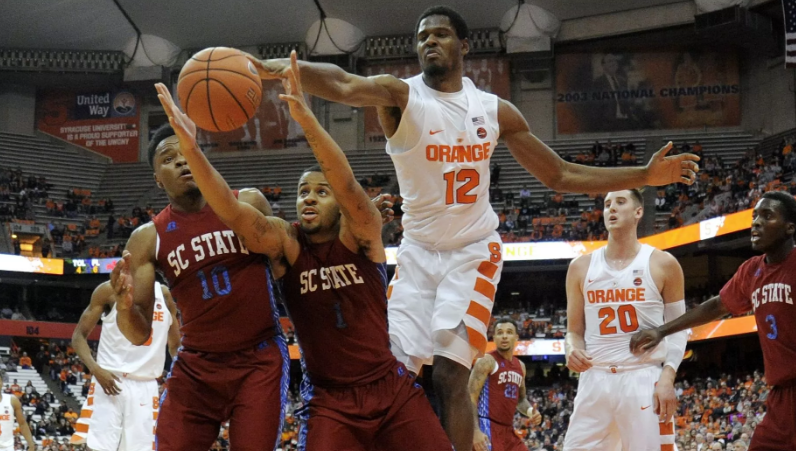 This was supposed to be DaJuan Coleman’s season to hold down the interior of Syracuse’s offense, but unfortunately for the fifth-year senior, that ship never left the port; injuries have sidelined Coleman, which is sadly the story of his career. Taurean Thompson, however, has become a force for the Orange at the basket on offense. Thompson has not drawn nearly as many headlines as some of the ACC’s other elite diaper dandies, but he’s put together an impressive freshman campaign, and he is only getting better.

Thompson has been solid all season, but starting with the win against Boston University, the rookie has really stepped his game up. Since mid-December, Thompson has averaged 9.9 points per game while shooting 56.4 percent on two-point field goals. He has also averaged one blocked shot per game over that stretch.

Syracuse does not have to run plays for Thompson to get him going; according to Synergy Sports, he has connected on 65.4 percent of his putback attempts following an offensive rebound. Of ACC players with at least 30 putback possessions this season, that clip ranks fifth in the conference. Thompson has also snagged 9.6 percent of available offensive rebounds while on the court in conference play, which ranks No. 15 in the ACC.

The freshman uses his length and is strong around the hoop. Per Synergy, Thompson has connected on 63 of 105 (60 percent) non-post-ups around the basket; that is good for No. 39 in the ACC. He has drawn a shooting foul on 7.6 percent of these 105 possession.

Thompson will need to bulk up and improve his free-throw stroke, but he could grow into a prolific offensive player simply by controlling the glass. He shoots 65.2 percent from the line, which is good because he can be a magnet for contact; per KenPom.com, he has drawn 4.5 fouls per 40 minutes in ACC games — good for 17th in the conference. That will be an easy avenue for Thompson to obtain points from as his career progresses.

Syracuse will say goodbye to seniors John Gillon and Andrew White, along with Coleman, after this season. In addition, Sophomore forward Tyler Lydon may enter the 2017 NBA Draft.

But there is no need to panic: Thompson and fellow freshman Tyus Battle are two very good young players who have the ability to push the Orange next season.