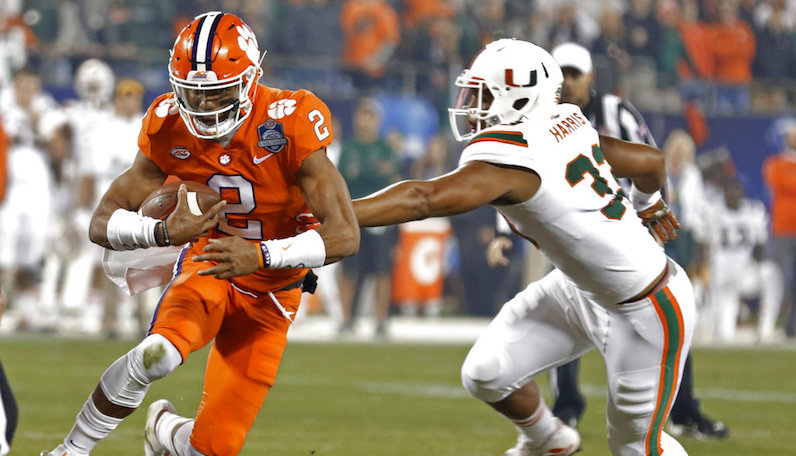 Clemson’s offseason has been filled with intriguing storylines since the Tigers were defeated by Alabama in the semifinals of the College Football Playoff.

Much of the team’s defensive line will be intact heading into the 2018 season. A couple of wide receivers, Deon Cain and Ray Ray McCloud, made somewhat surprising decisions to head to the NFL. The coaching staff will return intact after coordinators Brent Venables, Jeff Scott and Tony Elliott all fielded overtures from other schools. This continuity will make Clemson the overwhelming favorite to win another ACC title in 2018, and perhaps even a preseason No. 1.

Perhaps least surprisingly, Clemson has lost two scholarship backup quarterbacks. Tucker Israel and Zerrick Cooper have decided to move on from the Clemson program, where they can have a chance for more playing time. Cooper is heading to Jacksonville State, while Israel’s destination is still undetermined. Cooper and Israel saw the writing on the wall not only with the presence of starter Kelly Bryant, but also two other talented young quarterbacks who will be fighting for playing time for the Tigers in the coming years.

Bryant will return for his second season as Clemson’s starter with a chip on his shoulder after a lackluster game against Alabama. Taking the reins for the departed Deshaun Watson, Bryant finished seventh in the ACC with 2,802 passing yards in 2017. With a dominant defense and strong rushing attack, the Tigers didn’t have to rely on Bryant quite the same way they did Watson. But in 2018, as a veteran with a full season under his belt, Bryant will be positioned to break out and vastly improve his production.

Although Bryant started all 14 games this past season for Clemson, he was banged up at midseason. This provided Cooper some chances to show what he could do. Bryant suffered an ankle injury at Wake Forest, and a took a big hit, resulting in a concussion, in the loss at Syracuse.

Cooper completed 10 of 14 passes for 88 passing yards, without an interception, after Bryant went down against Syracuse. By carefully controlling the clock and avoiding turnovers, Cooper wasn’t the reason the Tigers fell to the Orange. But Bryant had two weeks to heal up for Georgia Tech, and Cooper didn’t record any stats in Clemson’s win over the Yellow Jackets. He played sparingly down the stretch.

In back-to-back signing classes, the Tigers have added elite 5-star quarterbacks. It’s this competition as much as the return of Bryant, a senior in 2018, that motivated Cooper and Israel to transfer.

Last winter, Clemson signed Hunter Johnson of Brownsburg, Indiana. Johnson was the No. 2 ranked pro-style quarterback nationally in the 247Sports Composite. This cycle, the Tigers signed Trevor Lawrence, a 6-6 emerging superstar from Cartersville, Georgia. Lawrence is the consensus No. 1 quarterback and No. 1 overall prospect nationally in the Class of 2018 in the 247Sports Composite.

Clemson found a way to get Johnson some action last fall, as he completed five of six passes in the season-opening victory over Kent State. He also took the field in the Wake Forest game following Bryant’s ankle injury. The rookie completed all five of his past attempts, including a touchdown, in the 28-14 victory over the Belk Bowl-bound Demon Deacons.

Johnson’s best performance was in a 61-3 victory over The Citadel in mid-October, as he completed seven of eight passes for 144 yards and another touchdown – a 78-yarder to another highly-touted newcomer, Tee Higgins.

Dabo Swinney has shown willingness to get his quarterbacks on the field as true freshmen. Bryant was Clemson’s fifth leading rusher in 2015, despite only playing in eight games and making no starts. Johnson played last year, despite a wealth of talent at the quarterback position for the Tigers. Lawrence will likely play this fall, since there’s a year of class separation between himself and Johnson.

Unlike many positions on the field, where multiple players play in a rotation, third, fourth and fifth quarterbacks may never play, except for a blowout or a rash of injuries. Cooper and Israel will now have a chance to get on the field, and stay there.

As for Johnson and Lawrence, they’ll have an epic battle in the coming months for the right to back up Bryant next fall, and then to replace him starting in 2019.