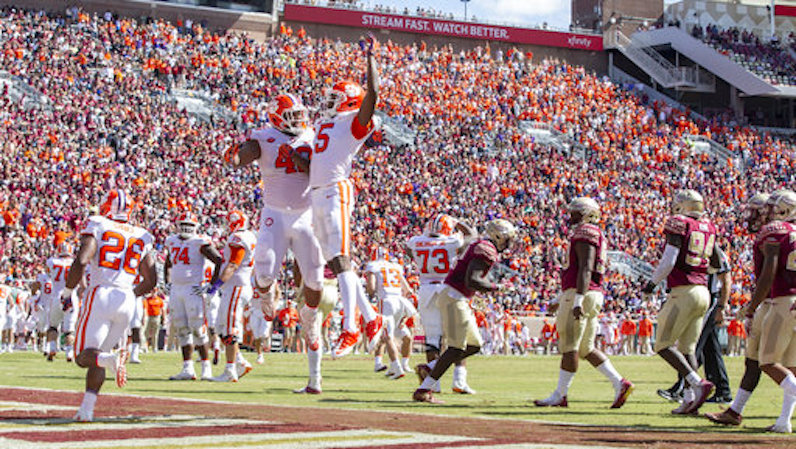 By the end of the 2017 season, you could see it coming: Tee Higgins is a star in the making at Clemson. In back-to-back weeks — wins over Citadel and South Carolina — Higgins caught nine balls (on 12 targets) for 262 yards (29.1 yards per reception) and two touchdowns.

With Deon Cain and Ray-Ray McCloud gone, Higgins has been elevated to No. 1 WR status. In 2017, Cain and McCloud combined for 155 targets, per Football Study Hall — nearly 35 percent of Clemson’s pass plays.

So far this season, Higgins has been the most targeted receiver on the roster: 32 receptions on 52 targets, good for a catch rate of 61.5 percent (9.4 yards per target). He isn’t alone, though; the Tigers are loaded at the skill positions.

Veteran receiver Hunter Renfrow — 26 catches on 35 targets — returned for his 27th season of college football, but three other underclassmen have elevated their games, too. Fellow sophomore wideout Amari Rodgers and freshman Justyn Ross are in the mix, too. Higgins, Rodgers and Ross have combined for 82 receptions (117 targets, 70.1 percent catch rate), 1,273 receiving yards (10.9 yards per target) and 13 touchdowns.

Currently, there are 11 players in the ACC who have 20+ receptions, averaged at least 13 yards per catch and have at least three touchdowns. Of that group, three come from Clemson — the most of any program: Higgins, Ross and Rodgers.

With Trevor Lawrence installed at quarterback (65 percent completion rate, 8.4 yards per attempts, 16 touchdowns, two interceptions), and this trio of young stud receivers, Clemson’s passing game is online for this season — and beyond. It’s scary to think about that quartet of players getting better as the 2018 season goes along — then have next offseason, and at least one more season to improve, dominate and collect monster number.