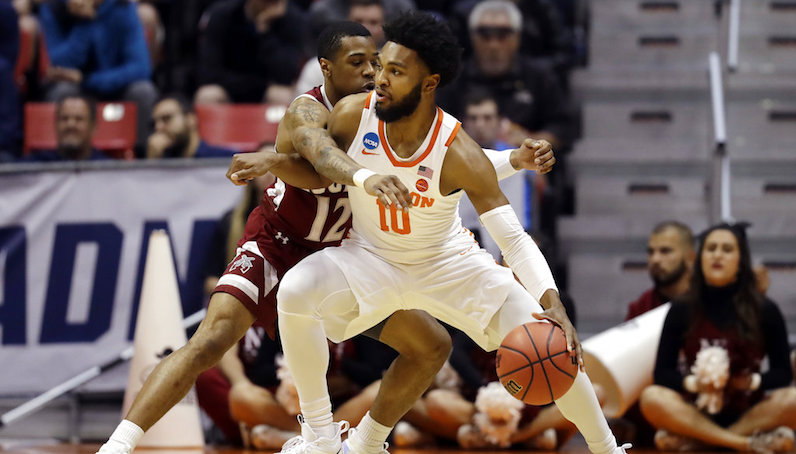 After the injury to Donte Grantham, Clemson basketball managed to hold things together. This wasn’t an easy process, though, and it didn’t come without some bumps in the road — the Tigers dropped three straight in mid-February (FSU, Duke, Virginia Tech).

Arriving at this point — one of 16 teams still playing for a title — was a collective effort; however, the Tigers aren’t moving onto the Sweet 16 for the first time since 1997 without the improved scoring of Gabe DeVoe.

DeVoe has been a stud for Clemson all season, and he’s maintained that high level of play in the Big Dance.

DeVoe splashed six three-pointers in Clemson’s blowout win over Auburn; he’s one of eight players to accomplish that feat in a game during the opening week of the tournament.

Prior to that, in the win over New Mexico State, DeVoe went 10-of-15 from the field, including 5-of-6 shooting on transition possessions (11 points), per Synergy Sports.

Omaha is the site for Clemson’s matchup with No. 1 seed Kansas. The Jayhawks feature a powerful perimeter trio: Devonte’ Graham (the Big 12 Player of the Year), Malik Newman and the hyper-athletic Lagerald Vick.

Kansas is a really good team, but Bill Self’s squad is driven by its offense — No. 5 nationally in efficiency, per KenPom. On defense, opportunities may present themselves for a Clemson team look to land an upset.

The Jayhawks rank 46th nationally in defensive efficiency, and opponents have shot 33.1 percent on three-pointers. That’s not a great clip, but this team isn’t razor-sharp at wing defense. In six of Kansas’ seven losses this season, opponents shot 39 percent or better from beyond the arc.

Clemson’s Brad Brownell: Depth was a concern, but “I thought we had all the pieces”