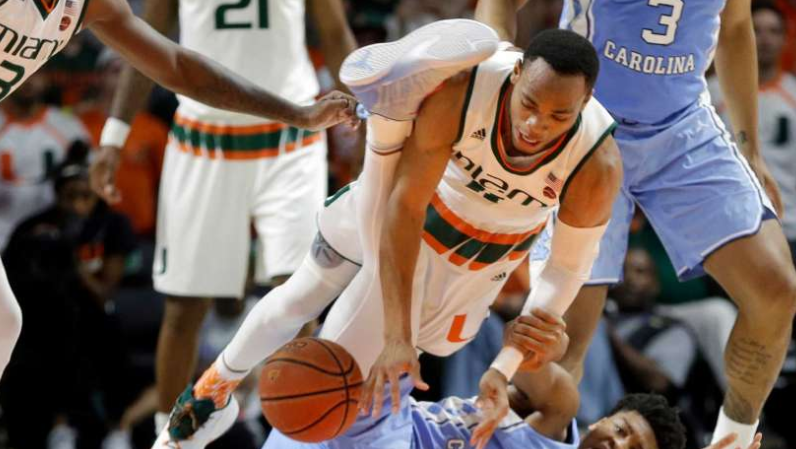 If I were to cobble together an All-ACC Freshman Team, it would go like this: Dennis Smith Jr., Jonathan Isaac, Josh Okogie, Jayson Tatum and Bruce Brown.

I made a mistake last week when I mentioned that Smith, Isaac and Okogie were the only three locks to make the team. It was a large oversight to not mention Miami’s Bruce Brown.

The Hurricanes fell Wednesday evening at home to visiting Florida State. Isaac led the Seminoles with 15 points and seven rebounds, and on the other side of the floor, Miami was paced by its own stud rookie. Brown scored a game-high 17 points.

Brown ranks third on Miami’s roster in scoring (12.3 points), and he’s second in assists with 3.1 per game. According to KenPom.com, the freshman has a relatively low usage rate; he takes up around 21 percent of Miami’s possessions when on the floor, which is only slightly above average. But he still manages to draw his fair share of fouls, which boosts his overall production. Brown, as a freshman, leads Miami in all of the major catch-all efficiency metics.

Over the last four games, Brown has really heated up: 35.8 minutes, 18.5 points, five rebounds, four assists, 56.4 field-goal percentage and 58.3 percent from beyond the arc. The rookie was sensational last Saturday against North Carolina, scoring a career-high 30 points (8-of-11 shooting) and handing out five assists.

Miami held a comfortable lead over North Carolina for nearly the entire contest, and Brown deserves a lot of credit for that. When Ja’Quan Newton hit the bench with foul trouble in the second half, Brown slid over from the wing to the point guard spot and was a steadying influence on Miami’s offense. Brown attempted 24 combined free throws against the Tar Heels and Seminoles.

One area, though, where he needs to improve is pick-and-roll decision-making. As a ball-handler in this action, Brown shoots a tidy 42.9 percent, according to Synergy Sports. He also gets to the free-throw line on 21.7 percent of those possessions — the second-best rate in the ACC. However, the freshman has turned the ball over 23.3 percent of the time when operating pick-and-rolls, which is one of the worst turnover rates in the conference.

Per KenPom, Brown has played 20 percent of Miami’s point guard minutes over the last five games, but he spends the majority of his time playing alongside Newton, a lead guard who tops the team in assist rate. Newton, when on the court, assists on 24.7 percent of Miami’s made field goals, according to Sports-Reference. In Brown, Newton has an excellent passing option. Brown ranks second in the ACC on unguarded catch-and-shoots: 1.95 points per possession on 65 percent shooting.

Opportunities to continue his recent hot steak are on the horizon: Miami’s next two opponents are NC State and Virginia Tech — both of which rank outside the top 90 in KenPom’s defensive efficiency rankings. If the Hurricanes are going to get back to the right side of .500 in league play, Brown will need to continue doing his thing and reaffirm his status as one of the best freshmen in college basketball.