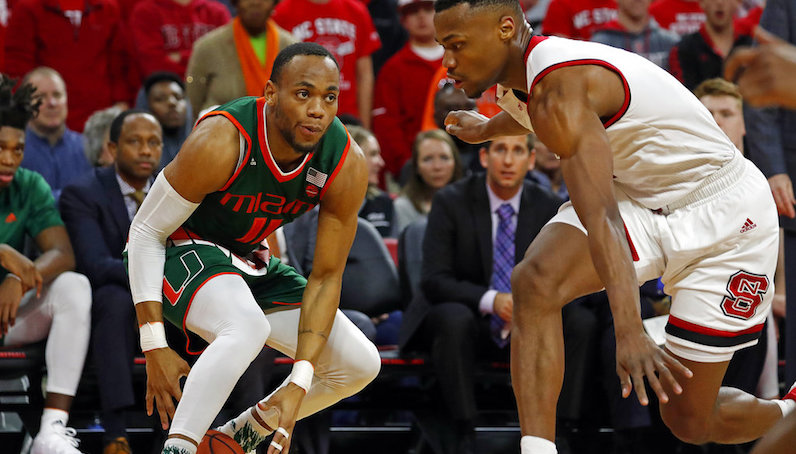 Another powerful ACC team will have to deal with an injury to its star player. On Tuesday, word came out that sophomore guard Bruce Brown will miss the next six weeks for Miami. Brown suffered an injury in his left foot; it will require surgery.

What Can Brown do for U?

Bruce Brown entered the season as a potential first round pick, but has seen some of his efficiency stats regress. The sophomore is shooting under 42 percent from the field and 26.7 percent on three-pointers — 48.8 percent true shooting.

Despite some struggles with his shot, Brown was still a dynamic two-way player — one of the ACC’s best wings — and an integral part of Miami’s ball-screen offense. Two weeks ago against NC State, Brown was prolific, which I detailed, and look liked the player we expected to see all season.

With Brown as a passer out of the pick-and-roll this season, Miami scored 1.26 points per possession — good for 11th in the nation, No. 1 in the ACC (minimum of 75 possessions) — on 60 percent shooting, according to Synergy Sports.

As a shooter from the pick-and-roll, Brown has an effective field goal rate of 41.1 percent, and has drawn a shooting foul on 11 percent of his possessions. That’s not great, but it’s solid, and better than several high-caliber ACC perimeter players: Deng Adel, Joel Berry and Tyus Battle.

On the defensive end

Miami ranks 16th nationally in adjusted defensive efficiency, per KenPom. Bruce Brown is a big part of that. The sophomore guard defends multiple positions, and always plays with great energy.

Brown is one of only six ACC players this season to have both a block and steal rate above two percent, per Sports Reference. He’s the shortest player on that list, too, which includes Isaiah Wilkins, Anas Mahmoud, Ben Lammers and Ray Spalding — the ACC’s elite defenders.

A versatile player, Brown spends time at all three perimeter positions. It won’t be easy to replicate his two-way playmaking, but Jim Larranaga has some options. Freshmen Lonnie Walker, who can be dynamic on offense, and Chris Lykes offer support; so, too, does Ja’Quan Newton, who has an opportunity to reorient and get his senior season back on track.

Miami prefers to utilize Anthony Lawrence’s skill set as a stretchy/switchy power forward; however, he could soak up minutes at the 3, too. That could open up more time on the block for Ebuka Izundu (great against NC State) and Sam Waardenburg (solid against Florida State)

Guard Dejan Vasiljevic is a low usage and low turnover player; in defeat at FSU, the sophomore had his best shooting game of the season: 6-of-10 on three-pointers. Perhaps the Hurricanes can get more from him as well.