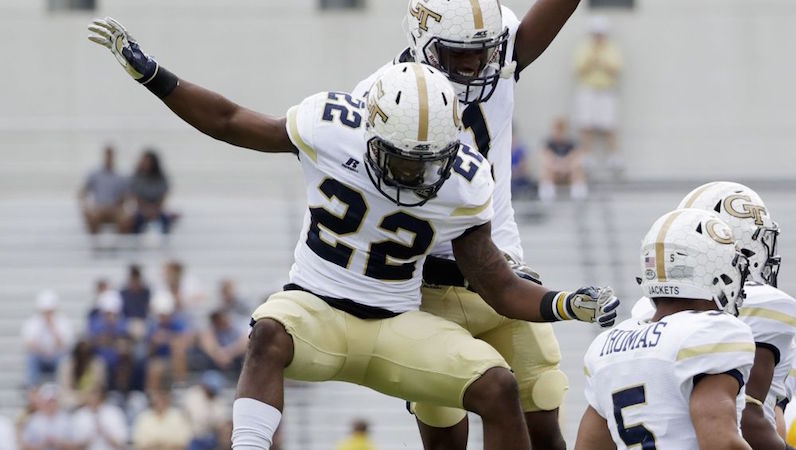 All Clinton Lynch does is score touchdowns.

Under Paul Johnson, Georgia Tech has never been known for explosive plays on offense. The Yellow Jackets, instead, wear opponents out with a ball-control option look that puts a premium on milking the clock. The Jackets led the ACC in time of possession in 2009, 2012 and 2014.

However, even the most methodical of offenses need the ability to pop big plays on the perimeter. That threat has to exist. This is where Lynch comes into play. The interior power runs loosen up opposing defenses; Lynch makes them pay.

Lynch followed up an outstanding freshman season with an even more prolific sophomore campaign. What differentiates Lynch from other Georgia Tech backs is his ability to move around the backfield. Most of the time, Lynch will split out as an A-Back; however, he scored multiple touchdowns from the B-Back spot, too.

Regardless of where he is lined up, Lynch is a threat to score and is an emerging weapon in Georgia Tech’s severely limited pass game.

According to Football Study Hall, Lynch was the third most targeted receiver in Georgia Tech’s attack in 2016. He hauled in 16 of his 21 targets — a catch rate of 76.2 percent — for 490 yards and six touchdowns, which was tied for the 15th most in the ACC. As a team, Georgia Tech had nine total touchdown passes in 2016; six of those went to Lynch.

Of ACC players to catch at least six touchdown receptions in 2016, only two other players did so on fewer than 30 receptions: Auden Tate (25) and Jaylen Smith (27).

Lynch was also tops on Georgia Tech in catch rate and yards per target — 23.3. Per cfbstats.com, 11 of Lynch’s receptions went for 15-plus yards.

Built from the ground up

While his production as a receiver increased, his role in the running game declined slightly. After rushing for 457 yards and five touchdowns on 48 carries as a freshman, Lynch recorded just 37 totes last season for 415 yards and two touchdowns. That tells just a small portion of the story, though. Lynch was still actually pretty darn good carrying the rock.

Over 40 percent of Lynch’s carries went for at least 10 yards, per cfbstats.com. He carried the ball for 20-plus yards eight times, too. According to Football Study Hall, he averaged 10.5 Highlight Yards per Opportunity. That means that when the offensive line did its job blocking at the line of scrimmage, Lynch averaged nearly 11 yards per carry. This alludes to the big-play ability. By comparison, on a much larger workload in 2015, Dalvin Cook averaged 10.1 Highlight Yards per Opportunity.

Georgia Tech will return 10 starters on offense; everyone but quarterback Justin Thomas will be back in The Flats. Matthew Jordan will run the show for the Yellow Jackets on offense, and you can bet that Lynch will factor heavily into the equation. Tech opens the season in Atlanta against Tennessee on Sept. 4.