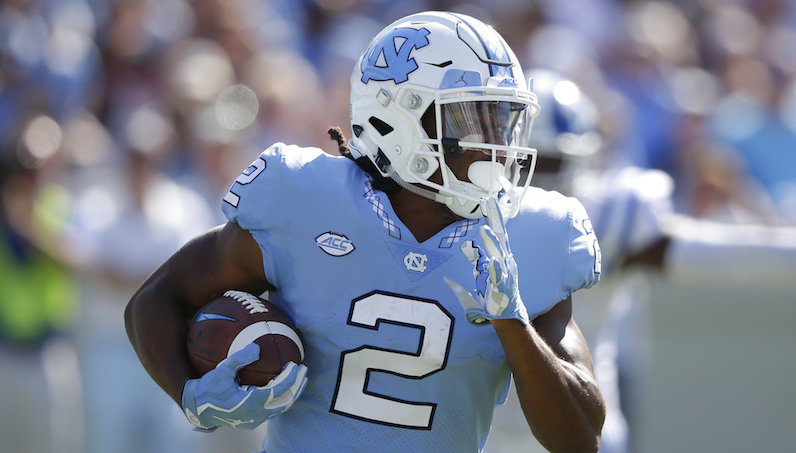 It’s obviously been a tough season in Chapel Hill. After winning 19 games (2015-16), North Carolina was headed towards a rebuilt in 2017. The proverbial hill to climb grew even stepper after Mitch Trubisky and Elijah Hood decided to go pro early.

Larry Fedora could plan for at least some of that. However, what he couldn’t budget for was the rash of injuries that’s plagued his team this season. Nearly a dozen players, including vets like Austin Proehl, are lost for the season.

UNC has dipped way into the bench to compensate; the results haven’t been pretty. The Tar Heels are 1-4 on the season, winless in the ACC. Football Study Hall gives UNC only a 9.2 percent chance of hitting six wins this season.

There have been some bright spots on offense, though. Freshman quarterback Chazz Surratt has had his moments. And sophomore running back Jordon Brown looks like a player, too.

Renting in the right neighborhood

Players have circled in and out of the lineup, but Jordon Brown has been a constant, so far. Brown has 74 total offensive touches on the season — 54 carries, 20 receptions. That’s good for an averaged of nearly 15 touches per game. He averages 78.8 total yards per game, too, which is good for No. 16 in the ACC.

The only game this season when Brown hasn’t touched the ball double-digit times was the loss to Lamar Jackson and Louisville.

Brown is North Carolina’s leading rusher and receiver. According to Football Study Hall, Brown has 23 targets this season — the most on the team; he’s turned those into 20 receptions (catch rate of 87 percent).

According to Sports Reference, Jordon Brown is one of only four FBS players averaging at least five yards per carry — with at least 50 receptions and 20 carries. One of the other three players on that list: All-World running back and Heisman favorite Saquon Barkley of Penn State.