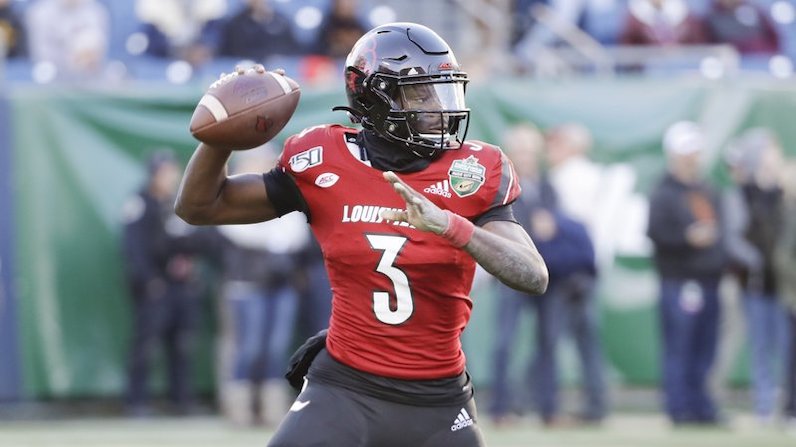 Louisville quarterback Micale Cunningham (3) plays against Mississippi State in the Music City Bowl NCAA college football game Monday, Dec. 30, 2019, in Nashville, Tenn. Last August, Micale Cunningham was recovering from a preseason knee injury that put him behind Jawon Pass on the depth chart. He returned to replace an injured Pass at midseason and didn't look back, passing for 2,065 yards and 22 TDs in 11 starts. (AP Photo/Mark Humphrey, File)

The No. 1 team in the country made quick work of The Citadel on Saturday. Clemson jumped out to a 49-0 lead with more than five minutes remaining the second quarter. The Tigers used the opportunity to get lesser-experienced players some reps.

Only 2 QBs have started 2+ games and have yet to make a turnover worthy play:

Brian Kelly wanted a shutout on Saturday, and that’s exactly what his defense delivered with a 52-0 rout over South Florida. Notre Dame didn’t force any turnovers; however, the Irish recorded 11 tackles for loss and forced the Bulls into a measly 13.3 percent conversion rate on third down.

C'Bo Flemister led the Irish in rushing with a career high 127 yards on 13 carries and one td run.

You have to go back three full years to find the last time Miami allowed 30 or more points and won a game: Sept. 23, 2017 against Toledo. This may be purely anecdotal, but that’s exactly what happened on Saturday at Louisville, and it could speak to a new level of offense in South Beach.

During his first two games with the Hurricanes, D’Eriq King has played fantastic football. Miami’s staff had the offense schemed up and ready to roll against Louisville; King delivered. The transfer quarterback completed 18-of-30 pass attempts for 325 yards (10.8 yards per attempt) and three touchdowns.

It was a busy night for star tight end Brevin Jordan, too: seven catches for 120 yards receiving and one touchdown.

Would adore a heat map analysis of how Miami attacked last night because they found so much joy to the boundary side of Louisville's defense. pic.twitter.com/QMsEuLaj60

After Charlotte was forced to cancel Saturday’s matchup at UNC due to COVID-19 concerns, the Tar Heels have tried to book a non-conference game for Sept. 26. However, those efforts have yet to produce anything. As of right now, UNC is set to go three weeks between games.

Pitt’s defense led the way in Saturday’s 21-10 victory over Syracuse. The Panthers forced two turnovers, sacked Syracuse quarterbacks seven times and recorded 14 tackles for loss. According to Sports Reference, the last time Pitt recorded 13+ tackles for loss in a single game came back during the 2013 season.

After missing the entire 2019 season with an ACL injury, defensive end Rashad Weaver returned to the lineup: two sacks, three tackles for loss.

On to week 3…. let’s work pic.twitter.com/M5lVKrIgxt

Saturday night didn’t produce the result Louisville wanted, but the Cards still managed to move the ball (516 total yards, 6.1 yards per play) and put up points against a tough Miami defense.

For Louisville, it was the talented backfield of Micale Cunningham and Javian Hawkins that led the way. Cunningham completed over 72 percent of his passes for 307 yards and three more touchdowns. Hawkins ran for 164 yards and a touchdown; this marks the the ninth 100-yard rushing game of his career. In three of those performances, Hawkins has gone for over 160 yards, too.

An hour before Saturday’s opener against Wake Forest, NC State flipped and announced lefty Bailey Hockman as its starting quarterback. In place of Devin Leary, Hockman took command of NC State’s offense in a high-scoring victory: 69.6 percent completion rate and 8.3 yards per attempt.

However, it was a potent run game that paced NC State’s offense.

From TE thru RG this is how we #EstablishIt pic.twitter.com/sKaomdOR2E

Person also attempted the first pass of his career: a two-yard Tebow-eque jump pass that hit Devin Carter for a touchdown.

"Oh jump pass … HOW ABOUT THAT? Oh my gosh that looks like 1955! Holy cow! Are you kidding me?" pic.twitter.com/ZiRJnyk8pI

After weeks of delays, No. 20 Virginia Tech will finally take the field and start its 2020 season next Saturday.

Fuente on this weekend's game vs. NC State: "We will not have a full roster. I hope we're able to play." Notes that the #Hokies still have three more COVID-19 tests this week.

The Eagles looked impressive at times during the second half of Jeff Hafley’s debut: 19 unanswered points in a 26-6 win at Duke.

Instead of pounding David Bailey 25+ times, Boston College and transfer quarterback Phil Jurkovec aired it out with success against an out-of-sorts Duke defense. Jurkovec went for 300 yards passing and two touchdowns, while spraying the ball to his two main targets: tight end Hunter Long and wideout Zay Flowers.

Jurkovec became just the second BC quarterback since the 2013 season to throw for 300 yards and two touchdowns in the same game.

Virginia gets set to launch its 2020 schedule next Saturday against an 0-2 Duke team that will be desperate for a victory.

Georgia Tech came back down to earth on Saturday as Central Florida scored 21 unanswered points in the fourth quarter to win 49-21 on the road.

Jeff Simms completed just 50 percent of his passes (6.8 yards per attempt) and threw two interceptions, too. On a positive note, though, freshman back Jahmyr Gibbs, a prized recruit, looked excellent in his debut: 126 yards from scrimmage and two touchdowns on 19 touches.

Wake Forest came up just a little short at NC State, falling 45-42. There were some good things for the Demon Deacons, though. Back in the saddle, Sam Hartman was efficient: 23-of-36 (63.9 percent) through the air for 236 yards.

Running back Kenneth Walker III was the team’s star, however. Going up against NC State, Walker went for career bests in carries (27), rushing yards (131) and rushing touchdowns (3).

Such a patient runner.

Duke’s offense turned the ball over five times against Boston College, including two Chase Brice interceptions, and managed just 351 total yards. So, yeah. That’s not great. The Blue Devils will need a better effort against a Virginia team that’s quite talented in its front seven.

There are serious structural concerns for Syracuse’s offense. For the second straight season, the offensive line — which has allowed 14 sacks through the first two games of 2020 — can’t pass protect.