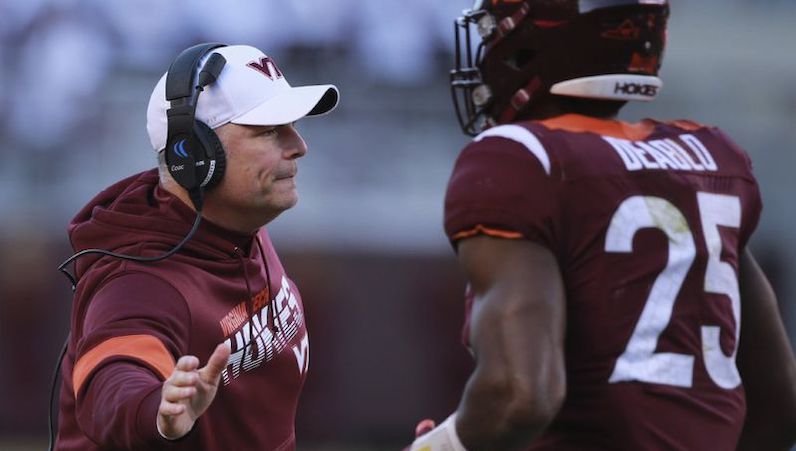 Due to COVID-19 concerns inside the Virginia Tech football program, the Sept. 19 matchup between Virginia and Virginia Tech has been postponed. The Hokies will pause football activities for four days.

According to Virginia Tech coach Justin Fuente, the program not only received positive tests for COVID-19 among players, but VT also placed certain players in quarantines due to contact tracing.

Virginia Tech was initially set to open the 2020 season at home on Sept. 12 against NC State; however, due to a cluster of COVID-19 cases in NC State’s athletics department in late August, that game was pushed back until Sept. 26. As of right now, this is when Virginia Tech is scheduled to start the 2020 season.

Just so I have the date right in something that'll get retweeted:

That's two postponements in the first two weeks for the #Hokies.

Virginia, on the other hand, will now start its season on Oct. 3 against Clemson. In total, UVA conducted COVID-19 tests on 768 athletes across its 27 varsity teams — with 14 positive results. However, there have been no new cases of COVD-19 in the football program since July 24, though Virginia did have a couple positive cases when players first returned to campus, back in early July.

Carla Williams, director of athletics at UVA, was contacted on Friday, Sept. 11, about the possibility of moving the game to a later date. Williams said she understood and respected Virginia Tech’s decision; UVA will work with the ACC and VT to find a future date.

#Hokies AD Whit Babcock. "While we share the disappointment of everyone who hoped to begin the football season against our in-state rival, we remain optimistic that a full ACC football schedule can be played thanks to the flexibility the present format permits."

The two programs will now work to possibly reschedule this game for later in this season; this could prove to be tricky, though. Over the next three months, the only open Saturday for both programs is Dec. 12, which is the date set for the 2020 ACC Football Championship Game in Charlotte.

Star cornerback Caleb Farley opts out of 2020 season, will prepare for NFL Draft