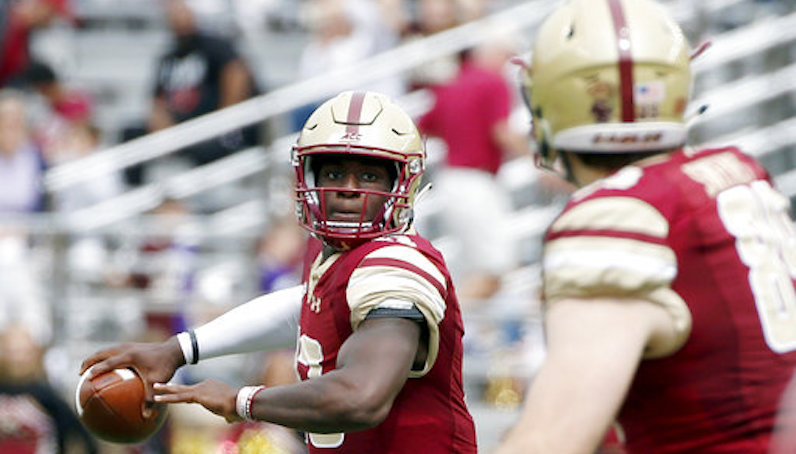 Boston College quarterback Anthony Brown (13) scrambles as he looks to pass during the first half of an NCAA college football game against Holy Cross, Saturday, Sept. 8, 2018, in Boston. (AP Photo/Mary Schwalm)

The Atlantic Coast Conference Football Players of the Week have been recognized following their performances in Week 3 of the 2018 season. The selections are determined by a vote of a 15-member media panel. The following are this week’s honorees:

Brown threw for a career-high 304 yards and five touchdowns on 16-for-25 passing in the Eagles’ 41-34 win at Wake Forest • Brown is one of two Boston College quarterbacks in school history to have thrown five or more touchdowns in a game without an interception (Doug Flutie threw for 354 yards and six TDs without a pick in 1984 versus North Carolina) • Brown became the first BC quarterback to throw for over 300 yards and five TDs in a game since Matt Ryan vs. Wake Forest in 2007.

Dillon repeated as ACC Running Back of the Week after he rushed for 185 yards and one touchdown in the win at Wake Forest • Dillon, who reached the 100-yard mark in rushing by halftime for the second consecutive game, has 2,021 yards rushing for his career • He became the 19th player in school history to rush for 2,000 career yards and ranks 17th all-time at BC.

Zaccheaus amassed a school-record 247 receiving yards in UVA’s 45-31 win against Ohio in a game played at Vanderbilt Stadium • It marked the most receiving yards by an FBS player this season and ties for the 10th best single-game total in ACC history • In setting the UVA single-game record, Zaccheaus eclipsed the 241 receiving yards by Ken Shelton in 1974 against William & Mary • Zaccheaus had scoring catches of 86 and 77 yards • The 86-yard touchdown reception in the first quarter was a career long and his third reception of 80 yards or more, which extends his UVA career record.

Recognized as the Walter Camp National Defensive Player of the Week, Ray set a single-game school record with four quarterback sacks as Boston College earned a 41-34 victory at Wake Forest • Ray also recorded a career-best eight tackles and had one quarterback hurry as the Eagles improved to 3-0, their best start to a season since 2007 • Ray leads the nation with 1.67 sacks per game.

Whitner tallied a career-high 11 tackles (eight solo) and forced a fumble as Syracuse defeated Florida State 30-7 to pick up its first victory over the Seminoles since 1966 • Whitner led a Syracuse defense that held FSU to 240 total yards, forced 10 punts, sacked quarterback Deondre Francois four times, and harassed the Seminoles into a 1-for-14 (.071) performance on third down.

Singleton carded seven tackles, caused one fumble, recovered another and broke up a pass in the Blue Devils’ win at Baylor • His fumble recovery midway through the first quarter set up Duke’s first touchdown • Singleton led the Duke defense, which shut out Baylor in the first half en route to building a 23-0 lead at intermission.

Szmyt was responsible for 12 of Syracuse’s 30 points in the Orange’s 30-7 victory over Florida State • Szmyt hit a personal-best three field goals, connecting from 22, 19 and 23 yards out • He also made all three of his PATs • Szmyt is 7-for-8 on field goals this season and a perfect 18-of-18 on extra-point tries • He leads the ACC in scoring and ranks sixth nationally at 13.0 points per game.

DeVito relieved injured starter Eric Dungey and led Syracuse to 24 second-half points in the 30-7 victory over Florida State • DeVito completed 11-of-16 passes for a career-best 144 yards and threw his first career TD pass to tight end Ravian Pierce in the third quarter • DeVito also rushed seven times for nine yards and a touchdown • Syracuse scored on five of its seven possessions when DeVito was in the game, not including the last offensive series when the Orange ran out the clock.