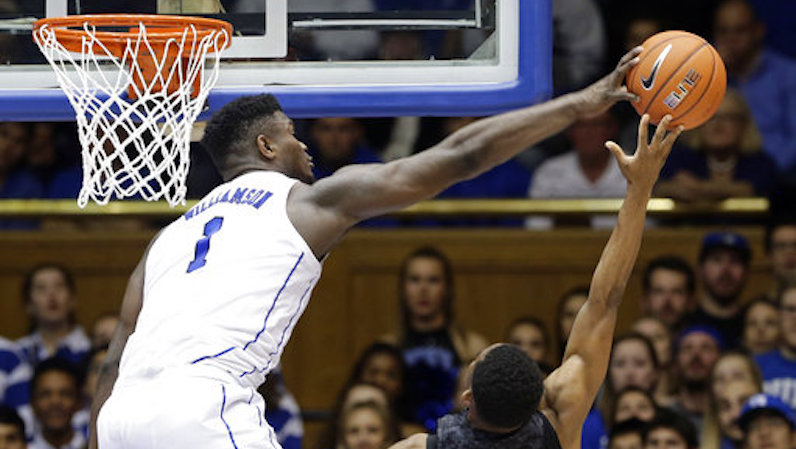 It was an eventful first week for the ACC, which went a combined 25-0 in that quick stretch. Duke grabbed the headlines, but Florida State’s victory over Florida was solid, too. Seven ACC teams landed in this week’s AP Poll — the most of any conference, including three in the top 10.

With that in mind, let’s hop back in for the second version of our ACC Basketball Power Rankings.

It will be over before you know it, but for the time being: this is the Zion Williamson Era of Duke Basketball. And, good lord, is it fun. After his masterpiece against Kentucky, Williamson followed that up with another dominant effort against an Army team that did some nice things offensively in Cameron.

Messing with filters can be kinda dumb, but Zion Williamson becomes just the 2nd player since the 2010-11 season to finish with 25 points, 15 rebs, 5 blocks and 4 assists, per @collegebb_ref

There aren’t many players in the nation off to a hotter start than Ty Jerome. The junior guard has slapped up two 20-point games, and he’s done so with remarkable efficiency: 40 points on 19 field goal attempts. Jerome’s comically-high 94.7 effective shooting clip ranks 20th in the nation, per KenPom. According to Synergy, Jerome has shot well out of the pick-and-roll (4-of-5 FGA, two points per possession), too.

With jet-quick rookie guard Coby White running the show, UNC is averaging just 13.8 seconds per offensive possession — No. 14 in the nation, per KenPom. While Kenny Williams has slumped shooting the ball to start the season (0-of-8 3PA), Cameron Johnson has come out gunning. After a 21-point performance in the win over Elon, Johnson is now scoring 2.29 points per possession on spot-ups, according to Synergy.

Cam Johnson scored 9 minutes in 6 minutes as a small-ball 4 in the 1st half, and now has 21 points in 21 minutes at the 4 this season.

After a rigged offensive performance to start the season against Eastern Washington (0.97 points per possession, 3-of-17 3PA), Syracuse steadied the ship in a win over Morehead State. The three-ball slumped again (3-of-16 3PA), but Cuse got the the free throw line 30 times; Tyus Battle and Elijah Hughes combined for 44 points on 30 field goal attempts — despite making a combined one three-pointer.

Despite 20 turnovers in the season-opening win over Gardner Webb (25 percent turnover rate), Virginia Tech still scored nearly 1.1 point per possession, according to KenPom. The Hokies got up 25 three-point attempts in that game, making 10 (40 3P%), including five from freshman guard Isaiah Wilkins, a product of Winston-Salem. (Shoutout Mount Tabor!)

Isaiah Wilkins said the plan was to redshirt until very recently.

We’ve been bullish for a while now on the defensive profile of rangy forward Aamir Simms; however, through the first two games of his sophomore season, he’s flashed some serious skills on offense, too. Simms doesn’t shy away from shooting from deep (38.3 percent of his career FGA), and he could add some nice stretch to Clemson’s frontcourt. In wins over the Citadel and North Carolina Central, Simms has scored 1.71 points per possession on spot-ups, per Synergy.

This team can be scary good. In the win over Tulane, Trent Forrest once again stuffed the stat sheet: 13 points (7 FGA), seven rebounds, five assists, three steals and two blocks. This dude is a beast; Forrest has assisted on 32.6 percent of his teammates’ field goals while on the floor this season. Just wait until FSU gets stretch 4 Phil Cofer back, too.

NC State hasn’t exactly opened the season playing against the Warriors and Bucks; Mount St. Mary’s and Maryland Eastern Shore both rank outside the top 325 in KenPom’s efficiency ratings. However, the Pack looked predictably dominant, with Torin Dorn (30.3 percent usage rate) leading the way. Dorn (7-of-11 3PA) is averaging 25 points per game over the first two contests.

Still, all is not well in the kingdom.

In the opener, Miami struggled from inside the arc (31 2P%), but the Hurricanes got it cooking from downtown: 14-of-32 three-point attempts (43.8 3P%). Over half of the team’s attempts were of the three-point variety.

Ah, yes, the beautiful machine. Mike Brey’s offense is up to its old tricks early in the season. On offense, Notre Dame has yet to have a shot blocked and turnovers are relatively low, too. Temple Gibbs, early in his run as the lead guard, has struggled with his shot: 3-of-15 on three-point attempts (20 3P%). In the half court, he’s 0-of-10 on spot-up field goal attempts, per Synergy,

Boston College avoided a scare at home against St. Francis — winning by just five points. It’s been a chilly start to the season from deep for BC’s top two perimeter options; Ky Bowman and Jordan Chatman, both excellent spot-up players, are just 5-of-18 on three-point attempts (27.8 3P%).

Paced by Sharone Wright Jr., Wake Forest sizzled on spot-up looks in the 90-78 win over NC A&T. According to Synergy, Wake scored 28 points on 16 half-court spot-up possessions — 1.75 points per possession (96.2 eFG%). The Deacs did allow the Aggies to score over 1.1 points per possession, though, which: not optimal.

New era, new players. So far, Pitt has received some positive contributions from a host of players. In the first two games — both wins — Pitt has scored 1.31 points per possession in transition (20.3 percent of their possessions), according to Synergy. Freshman guard Xavier Johnson — 15 points per game, 26.3 percent usage rate — has looked sharp.

This team’s calling card will be defense, and in the opener — a win over Lamar — Georgia Tech was steady: 0.87 points per possession, eight blocks, and only 16 three-point attempts allowed.

Is Kenny Williams another playmaking piece for UNC hoops?