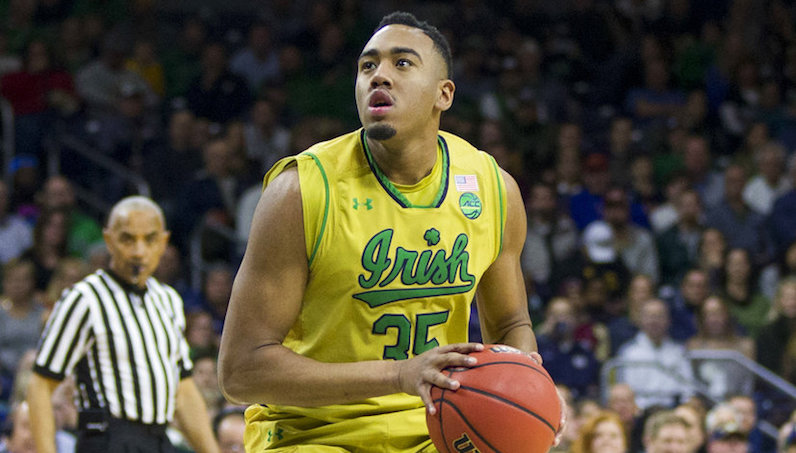 Notre Dame's Bonzie Colson (35) as he looks for a shot during the first half of an NCAA college basketball game against Florida State in South Bend, Ind. (AP Photo/Robert Franklin)

The ACC Analytics page this week published a look at which Virginia basketball players are the best at the end of the shot clock. This got me wondering what it would look like if that search was expanded league wide.

Many of those players, like Tatum and Florida State’s Dwayne Bacon, are in the NBA now. In this group, we have not included former ACC players — only current athletes. This is a look at the 15 most efficient returning players in end-of-clock possessions.

Who’s best in the clutch?

It should be no real surprise that Bonzie Colson — a player near and dear to my heart — ranks near the top of this list. Notre Dame was a top-20 offense in terms of KenPom’s efficiency ratings; the Irish also ranked No. 236 in Division I ball in terms of tempo. Colson led the team in usage rate, too. Therefore it would make a lot of sense for him be a productive late-clock option on offense.

A key component of Colson’s efficiency was his ability to create contact in these situations. According to Synergy, Colson drew a shooting foul on 11.1 percent of his late-clock possessions. Only a handful of players used at least 40 possessions; Colson’s free throw rate ranked second to only London Perrantes (11.6 percent) of Virginia.

Of the 15 players included on this list, only two — Colson and Isaiah Wilkins — are full-time frontcourt players. The other 13 players are guard or wings, which makes sense. At the end of a possession, these are the most likely players to have the ball in their hands.

Virginia Tech’s Justin Robinson is sneaky good in this category, too. Robinson posted an effective field goal rate of 43.5 percent and a turnover rate of only 3.6 percent. That’s why he’s one of only eight ACC players last season to score at least one point per possession. Two of those players went on to be top-12 picks in the NBA Draft: Tatum and Luke Kennard.

Dennis Smith Jr. was one of only two ACC players to use at least 50 possessions with under four seconds left on the clock, per Synergy. Notre Dame’s Matt Farrell was the other. However, NC State’s other freshman point guard was more efficient in these situations, albeit on a much smaller sample. Markell Johnson scored 0.74 points per possession; DSJ hovered at 0.58 points per possession, according to Synergy.

Context is important here, too. Smith and Johnson frequently shared the floor in 2016-17. Whenever DSJ was on the court, which was a lot, defenses loaded up on him; it’s no secret that State’s offense flowed through its one-and-done star. Even for a player as good as Smith, it’s a challenge to be both high-usage and efficient, especially when the opponent’s game plan is to stop you.

With Joel Berry out, Roy Williams and North Carolina will have to briefly reconfigure lineup combinations. They may also have to find a new player — at least temporarily — to get up shots late in the clock.

Berry is UNC’s most experienced returning players; he’s also the team’s top end-of-clock operator. This is another opportunity for Theo Pinson and Cameron Johnson to put their imprint on this mostly new team.

How football saved the ACC