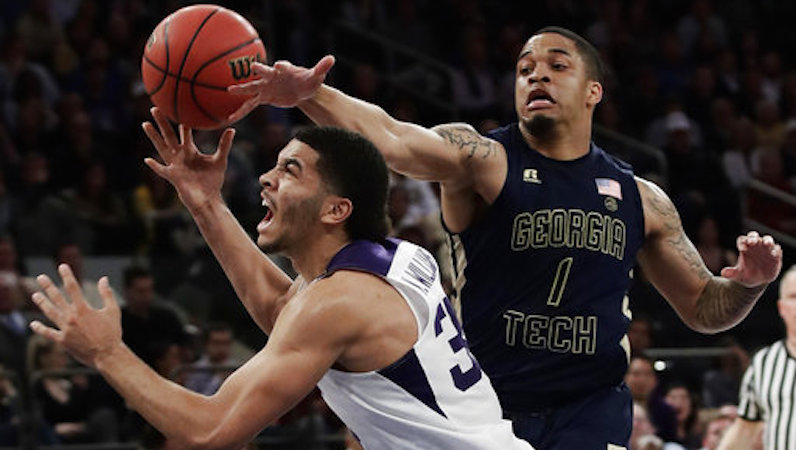 TCU's Kenrich Williams (34) loses control of the ball as he drives to the basket past Georgia Tech's Tadric Jackson (1) during the first half of an NCAA college basketball game in the final of the NIT Thursday, March 30, 2017, in New York. (AP Photo)

Georgia Tech’s season came to a conclusion on Thursday in the NIT Championship game. TCU rolled over the Yellow Jackets 88-56.

Despite the loss, there is a lot to like about what Georgia Tech accomplished the last few months. Heading into the season, expectations were extremely low. However, Tech managed to win 21 games and narrowly missed out on the NCAA Tournament before a solid NIT run.

There are some serious positives that this team can carry over to next season, and no, this is not about momentum.

In Josh Pastern’s debut season in Atlanta, Georgia Tech achieved one of the largest jumps in improvement on defense.

According to Synergy Sports, Georgia Tech allowed 0.97 points per possession on non-post-ups at the basket. That ranks No. 13 in the nation and is the best figure in the ACC. Opponents shot 46.8 percent on said possessions, too. The next-best mark in the ACC is Miami: 49.5 percent. By contrast, Boston College ranks dead last — 56.8 percent.

Teams shot just 39.2 percent against Georgia Tech on half-court possessions, per Synergy. Among ACC teams, only Virginia and Louisville were stringier in the half-court. Of note: Both of those teams also ranked inside the top 10 in defensive efficiency.

In conference games, ACC foes shot just 40.7 percent from the field and 44.2 percent on two-point attempts — both of which ranked No. 1 in the league.

The backbone of Tech’s interior defense is Ben Lammers, who was one of the most improved players in Division I basketball this season. Lammers did more than just lead the ACC in blocks (3.4 per game). The junior from Texas rejected 10 percent of opponents’ two-point field goals while on the floor this season, which is the 21st best figure in the nation, per KenPom.

Lammers defended post-ups more than any other type of possession this season, and he was quite good. Per Synergy, Georgia Tech’s big man defended 122 post-ups; Bonzie Colson of Notre Dame is the only other ACC player to defend more than 100 post-ups (113). Lammers held opponents to 0.79 points per possession on post-ups.

When Lammers defended a shot with under four seconds left on the shot clock, opponents were just 1-of-13 from the field (7.7 percent), according to Synergy.