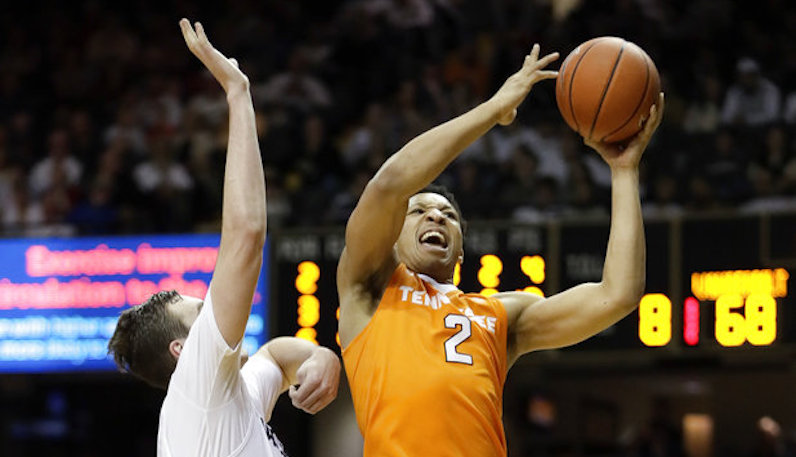 With the majority of conference play on the horizon for ACC basketball, a busy weekend of non-conference games. Here’s five things to keep an eye with several top 25 teams in action.

The Tar Heels better be ready on Saturday. Tennessee sophomore forward Grant Williams, a product of North Carolina, is a matchup nightmare. Williams averages 16.1 points, and has scored at least 20 points in three games this season, including the team’s lone defeat: Villanova.

The 6-foot-7 Williams splits time at the 4 and 5 for the Vols; he does most of his damage at the basket. According to Synergy Sports, Williams scores 0.9 points per possession on post-ups. He’s drawn a shooting foul on 18.8 percent of his post-up possessions, too. Williams has scored 57 points from post-ups this season — tops in the SEC.

Williams is also 65.4 percent on non-post-up possession around the basket. It will be interesting to see which UNC player draws the primary assignment on Williams. Could Theo Pinson be called upon as a small-ball 4?

The Tigers welcome David Skara to the lineup

Clemson faces its toughest challenge of the season so far: No. 22 Florida, on the road. Led by Donte Grantham and Elijah Thomas, the Tigers have formed a potent offense early in the 2017-18 season. However, on Saturday, Clemson will add the defensive-minded David Skara to its rotation.

Skara, a transfer for Valparaiso, was suspended for the first nine games of this season, due to an NCAA violation committed at his old school.

The 6-foot-8 Skara spent most of his time at small forward during the 2015-16 season at Valpo. That season, Skara held opposing pick-and-roll ball handlers to 25 percent shooting and 0.55 points per possession — No. 100 in the nation that season.

Brad Brownell has decided to roll with a three-guard lineup for the majority of this season — with Gabe DeVoe as the de facto small forward. Skara adds some switchy versatility and length to Clemson’s lineup; he should pair well with Grantham, too.

There are currently 12 players in the ACC shooting 45 percent or better on three-pointers on at least two attempts per game. Four of those guys play for Virginia Tech: Justin Robinson, Justin Bibbs, Ahmed Hill and Nickeil Alexander-Walker.

To say the Hokies are a good shooting team would be putting this mildly. Virginia Tech leads the nation in effective field goal rate and ranks second in three-point percentage, per KenPom.

However, Virginia Tech faced a mostly easy schedule so far this season — just two teams inside KenPom’s top 100. That will change this weekend in Lexington.

No. 8 Kentucky is wildly young — big surprise, I know. But the Wildcats are No. 12 in the nation in adjusted defensive efficiency; opponents are shooting just 30.2 percent from deep against them. Who wins out? If VT gets hot from deep, my money is on them.

Get Right With Ya: Notre Dame looks to refocus season vs. IU

Notre Dame is the flag-bearer for the ACC Analytics page; we can’t have these guys slumping! Alas, the Irish have dropped to of the last four games: a beatdown on the road at Michigan State and an embarrassing home defeat to Ball State.

The defense was the biggest issue; in both of those feats, Notre Dame allow better than 1.1 points per possession, according to KenPom.

However, we expected the Irish to have some issues on that side of the floor this season. The offense was supposed to cover up those blemishes, though. In recent games, Notre Dame has lost some balance. Bonzie Colson is an automatic 19 points per game; Matt Farrell is always going to rip nets from deep. But the Irish need supplementary scoring, too. This is where Temple Gibbs comes into play.

After a sizzling start to the season, Gibbs has cooled off in recent weeks. Starting with the Maui Invitational title bout, Gibbs has scored 11.4 points per game. That sounds pretty good; however, Gibbs has shot just 40.5 percent from the floor and under 30 percent from deep in that stretch.

Indiana is just 5-5 on the season, but this team is already battle tested. The Hoosiers have played one of the toughest schedules in America: Duke, Louisville, Seton Hall and Michigan. Indianapolis will be the site for this Hoosier State (long live Kurt Vonnegut) showdown.

Inside The Playbook: No Drag, Omer Yurtseven is one of the top PNR finishers in America