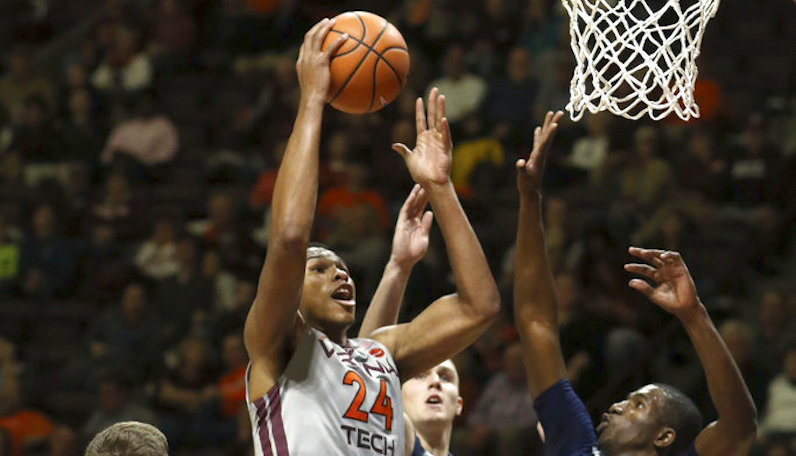 in the first half of the Virginia Tech - Citadel basketball game in Blacksburg Va. Sunday November 12 2017. (AP Photo)

Starting this week, Virginia Tech basketball enters a challenging portion of its schedule. Over the next three weeks, Virginia Tech will play three teams that rank inside the top 70 of KenPom’s efficiency standings. That includes a road matchup with No. 8 Kentucky, which comes right after exams end.

Similar to last season, the Hokies will rely on an offense that has plenty of firepower to get the job done. Virginia Tech currently ranks No. 18 in Division I basketball in terms of adjusted offensive efficiency: 114.6 points per 100 possessions, according to KenPom.

The Hokies also led the nation in a statistic that will certainly make Buzz Williams happy. Virginia Tech is No. 1 nationally in effective field goal rate, a metric that Williams frequently brings up — 67.7 percent. Currently, that’s way ahead of everyone else. Xavier ranks No. 2: 63.5 percent.

Here’s a look at how Virginia Tech makes it work.

On offense, the Hokies feature four players that have attempted at least 18 three-pointers and have made at least 46 percent of their attempts from downtown, too. As a team, Virginia Tech has connected on 49.6 percent of its three-point attempts — 66-of-133 (over 22 attempts per game). Can you imagine what this would look like if the Hokies had Ty Outlaw healthy, too?

No surprise — the usual candidates are once again bombing. Justin Bibbs is 11-of-22 from deep; he has a ridiculous true shooting rate of 79.8 percent, and ranks No. 33 nationally in terms of offensive efficiency, per KenPom. Bibbs, who served a two-game suspension earlier this season, has scored 85 points in 127 minutes on just 48 field goal attempts.

Justin Robinson has dished out 30 assists already this season; he’s assisted on 29 percent of his teammates’ made field goals while on the floor this season, too. Robinson has also drilled his jumpers: 9-of-18 from beyond the arc.

The new guy in the mix is freshman Nickeil Alexander-Walker. The Canadian, who joined the Hokies as a top-40 prospect, looks as good as advertised. Alexander Walker has drilled 47 percent (15-of-32) of his three-pointers.

In an effort to open the floor up, Virginia Tech is playing faster than ever before under Buzz Williams. The Hokies rank No. 40 in terms of adjusted tempo, per KenPom: 73.6 possessions per game. The average offensive possessions for Virginia Tech is currently 13.9 seconds, which ranks No. 7 in Division I basketball.

Nearly 28 percent of Virginia Tech’s offensive possessions have come in transition, per Synergy. That’s easily the most of any ACC team; Louisville is No. 2 at 25.1 percent. Virginia Tech is guard-heavy this season, especially after the fall departure of Khadim Sy.

The solution for Buzz Williams: pace and space, baby.

The Hokies have been wildly efficient in transition, too. According to Synergy, seven different players have used at least seven transition possessions, and score greater than 1.1 points per possession.

Justin Robinson has shot well in transition, too: 6-of-12, 58.3 effective field goal percentage. However, a high turnover rate (33 percent) has dropped his overall efficiency (0.88 points per possession).

Next up: ACC-Big Ten Challenge

Things will start to get real for Virginia on Tuesday night, when the Hokies host Iowa — No. 66 in KenPom’s efficiency rankings. The Hawkeyes aren’t a very good defense team, but they do have size. According to KenPom, Iowa ranks fifth nationally in terms of average height.

Can Virginia Tech’s small-ball approach continue to pile on the points without sacrificing too much on the glass?