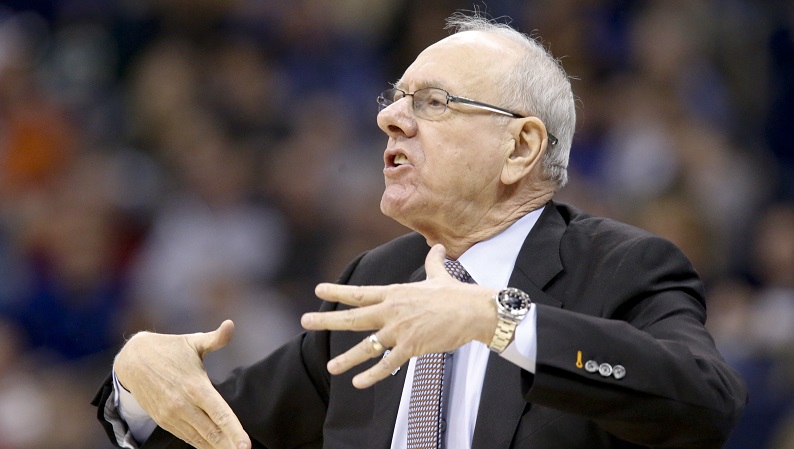 After losing four of its first five ACC games this winter, Syracuse looked dead in the water. At 12-6, with a non-conference win over Maryland, the Orange’s NCAA Tournament resume wasn’t too spectacular in mid-January. The Orange have gotten things together by putting together a three-game winning streak. But with a daunting schedule ahead, can Jim Boeheim’s club pull it together to return to the Big Dance?

At 15-6, and 4-4 in ACC play, Syracuse is firmly on the bubble heading into February. The Orange still have to travel to Louisville, Miami, and Duke. They host Virginia, NC State, North Carolina, and Clemson in the Carrier Dome. That’s the bad news.

The good news is Syracuse controls its own destiny. If the Orange split their remaining ten ACC games, they will sit 21-11, and 9-9 in regular season play, heading into the ACC Tournament. A win or two in Brooklyn should secure Syracuse’s bid in the field of 68. But the key thing is that if they can win five more ACC games, they’ll have to win at least a couple against ranked opponents. That wasn’t the case in the recent three-game win streak. Two of Syracuse’s three recent victories came over Pittsburgh, a team that remains winless in ACC play.

The Orange slowly wore down the Panthers in a low-scoring 59-45 triumph at home Jan. 16 before prevailing at Pitt. Syracuse used a 12-3 run over a six-plus minute stretch late in the second half of the road victory. The Panthers went over five minutes without a made field goal. In-between the wins over Pitt, the Orange dominated Boston College, 81-63, in the Carrier Dome.

The Orange have struggled offensively, ranking No. 108 nationally in the KenPom.com adjusted offensive tempo rankings. Through 21 games, Syracuse ranked 11th in the ACC in scoring (70 ppg), 14th in shooting percentage (42.8 percent), and 14th in 3-point shooting percentage (32 percent). Tempo has been a problem for the Orange, as they’re among the worst teams in the country – 344th nationally – in adjusted tempo. They’ve been relying disproportionally on three players – Tyus Battle, Frank Howard, and Oshae Brissett – to combine for 70 percent of the team’s scoring.

On the other hand, Syracuse has been much stronger defensively, ranking No. 11 nationally in adjusted defense. Only Virginia among ACC schools is allowing fewer points than Syracuse’s 63.2 per game. Syracuse also ranks second in the ACC in field goal defense, allowing opponents to shoot just 37.9 percent. The Orange have also been rebounding fairly well, ranking third in the ACC, behind only Duke and North Carolina, with over 39 boards per outing.

Boeheim has relied almost entirely on his leading core throughout the season – even more so since Matthew Moyer sprained an ankle. Without Moyer for the foreseeable future – perhaps a few more weeks – the Orange are even more reliant on a few players. Syracuse is averaging the fewest bench minutes in the country this season. The Orange have just seven scholarship players currently available to play.

Bourama Sidibe came up huge for Syracuse in the second Pitt game, with 18 points and 16 rebounds. The Orange need Sidibe, who didn’t even play against Boston College, to continue stepping up in the second half of the ACC schedule, despite nagging tendinitis in his left knee.

It’s not a lost cause for the Orange to have a chance at March Madness. But in order to maximize their opportunity, they need to improve their shooting, while getting a little more off the bench. With a strong defensive and rebounding squad, they’ve found ways to persevere. When they’re shooting well, they’re one of the toughest outs in the league. With improved depth from bench players like Sidibe, they can be a dangerous team heading down the stretch.