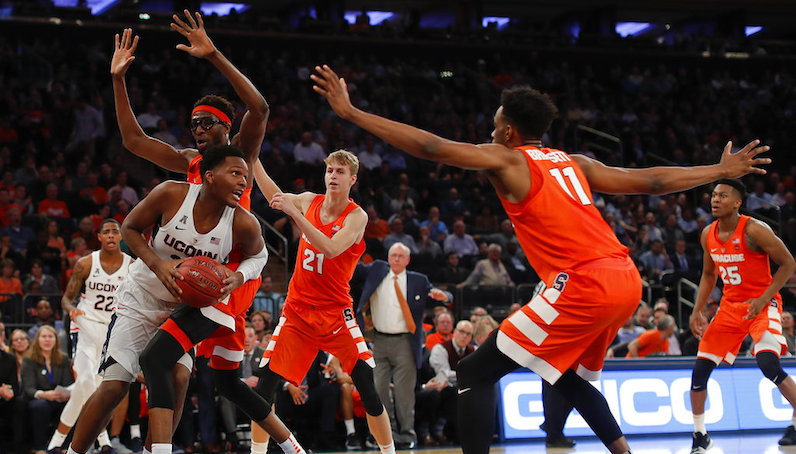 In the 2016-17 season, Syracuse basketball was uncharacteristically bad on the defensive side of the floor. Tyler Lydon and Taurean Thompson are both great players; however, it was asking a lot out of those guys to man the middle of Syracuse’s 2-3 zone. Lydon and Thompson have the ability to block shots, but they’re both offensive-minded players that want to show off their skills on the other end, not cause havoc defensively.

As a result, Syracuse blocked plenty of shots last season, and piled up steals — another trademark of the team’s zone defense. According to KenPom, the Orange ranked top 20 nationally in both block and steal rate. In terms of defensive efficiency, though, Syracuse ranked No. 119; it was the worst defensive season for the program since at least the 2001-02 season.

Part of the problem: Syracuse gave up way too many offensive rebounds. Opponents snagged nearly 35 percent of their misses against the zone — one of the 20 worst rates in the entire country.

Starting with Paschal Chukwu, a group of mostly newcomers is changing the tide in terms of how this team defends the basket and cleans the glass.

Last December, Paschal Chukwu underwent surgery on a torn retina in his right eye — suffered in the team’s win over Holy Cross. The injury, which cost Chukwu the entire season, started a long rehabilitative process. Three surgeries later, though, and Chukwu is back — goggles strapped to his face — and proving his merit as the back line defender of the zone.

Thompson’s decision to transfer to Seton Hall cleared up a lot of minutes in the middle for Syracuse, and Chukwu has taken full advantage. Chukwu has rejected 24 shots in 199 minutes of action so far this season. According to Sports Reference, he’s one of just eight Division I players with at least 20 blocks in under 200 minutes of play. The 7-foot-2 Chukwu has rejected 17 percent of opponent two-point field goal attempts while on the floor this season. That ranks No. 4 in the nation, per KenPom.

A year ago the zone was leaky on the offensive glass; that’s simply not the case this season, though. Syracuse ranks inside the top 50 nationally in defensive rebounding rate — 75.5 percent. Chukwu has grabbed 17 percent of the available defensive rebounds while on the floor, too.

It takes an army

The addition of Paschal Chukwu has certainly been a revelation for Syracuse on defense; however, it’s not just the 7-footer that’s making a difference.

Freshmen Oshae Brissett, Marek Dolezaj and Bourama Sidibe are still looking to find their feet on offense, but they’ve demonstrated great effort in terms of their defense. All of of those guys have defensive rebound rates above 15 percent, according to KenPom. Brisseett hovers close to 21 percent — No. 247 in the nation. That collective effort has gone a long way; the zone requires multiple rebounders to be ready to go grab the ball. So far, so good.

Plus, 6-foot-8 second-year forward Matthew Moyer has chipped in, too: 8.8 rebounds per 40 minutes.

Additionally, teams are shooting a lowly 39.8 percent and scoring just 0.79 points per possession (No. 3 in the nation) on non-post-up attempts around the basket against Syracuse. The Orange have also held opponents to 11.8 percent shooting on jumpers inside of 17 feet — No. 1 in the nation. That’s helped land Syracuse back inside the top 50 nationally in terms of defensive efficiency.

The Orange still have a ways to go; the team has feasted on a mostly easy non-conference schedule, but Syracuse did well keeping Kansas off the offensive glass, which should inspire some more confidence.