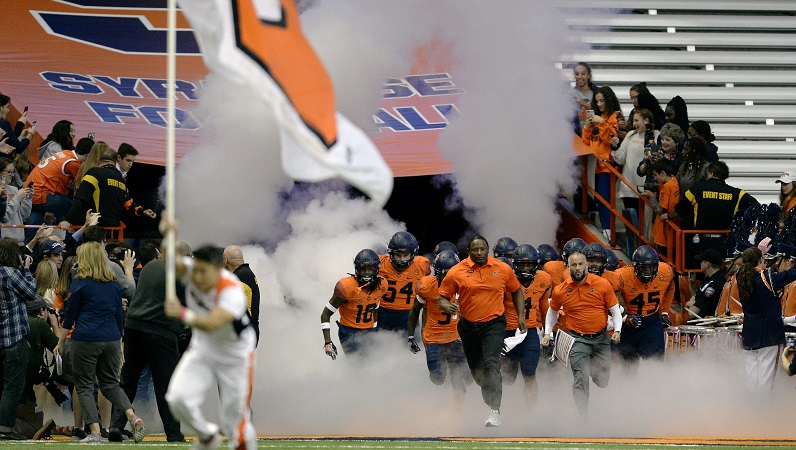 Syracuse’s offense has gotten a potentially major boost for the 2019 season in the form of Abdul Adams. The former Oklahoma running back transferred to the Syracuse football program in January, and is working out in the weight room this winter with the Orange. Although Adams must sit out the 2018 season as a transfer, he plans on practicing with Syracuse this spring. He’ll have ample time to learn Syracuse’s schemes.

Adams decided to transfer from Oklahoma due to concerns about playing time and the way he was being utilized. He was benched after dropping a pass against Oklahoma State in early November, after also being benched following a fumble against Ohio State. He also missed time with an ankle injury.

Although Adams received just 59 carries in 2017 – just six more than he did as a true freshman in 2016 – he made the most of them, averaging 9.2 yards per carry. Adams established a new OU school record with a 99-yard run against Baylor. But Oklahoma’s backfield is stacked heading into the 2018 season, and Adams’ path to playing time would have been obstructed. OU’s top two rushers, Rodney Anderson and Trey Sermon, both return, along with multiple other potential contributors.

By contrast, Adams has timed his transfer to Syracuse well in terms of playing time. Dontae Strickland, Syracuse’s top rusher the past two seasons, is heading into his senior season in 2018. Adams is poised to step in behind Strickland in 2019 and be his heir apparent as SU’s top running back.

The Orange will still have Moe Neal in 2019. But Neal, Syracuse’s second-leading rusher as a sophomore in 2017, is also a versatile option in the passing game. Adams is more of the every-down rusher, while Neal can be useful in more of an all-purpose and scenario-specific role. Having both Adams and Neal together would give the Orange a multi-faceted veteran offensive backfield in 2019 that could show different looks and produce in a variety of ways.

Although Syracuse ranked third in the ACC in total offense in 2017, averaging 456.3 offensive yards per game, the Orange were ninth in rushing, averaging 161.5 yards per game. SU ranked next-to-last in the ACC with only 16 rushing touchdowns in 12 games.

Last season, no ACC team threw the ball more than Syracuse. The Orange attempted a whopping 548 passes (45.7 per game). Having a marquee rusher like Adams will allow the Orange to be more diversified offensively.