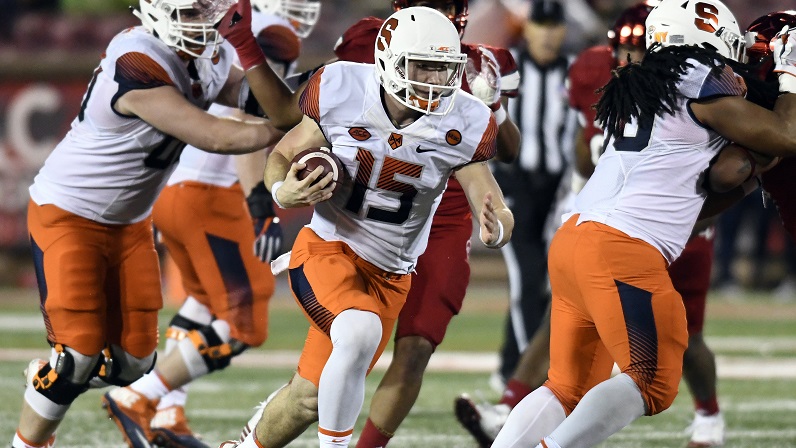 The 2017 season was a roller coaster of emotions for the Syracuse football program. After getting off to a solid start with a season-opening 50-7 victory over Central Connecticut State, the Orange were stunned, 30-23, by Middle Tennessee in their second contest.

The Orange regrouped and stunned top-ranked Clemson in mid-October, handing the Tigers just their second regular season loss in the last three seasons. They also hung with bowl-bound teams such as Miami, LSU, and NC State, all on the road, in September and October.

When the Orange traveled to Tallahassee for a Nov. 4 encounter with Atlantic Division rival Florida State, they were 4-4. With remaining contests against the underachieving Seminoles, along with traditional Atlantic Division bottom feeders Boston College and Wake Forest, the Orange were positioned well for a bowl berth in Dino Babers’ second season. But starting with Derwin James’ deflection of Cole Murphy’s late 43-yard field goal attempt that could have forced overtime, a devastating 27-24 loss to FSU sent Syracuse’s season on a dramatic downward spiral.

Although a nagging lower leg injury limited starting quarterback Eric Dungey down the stretch, it wasn’t the Syracuse offense that cost the program a 13th game this December. Syracuse gave up a whopping 162 points to Wake Forest, Louisville, and Boston College in its last three games, dramatically skewing its final defensive statistics in a 4-8 finish.

A defensive unit that ranked among the best in the country in third down efficiency midway through the year finished ranked dead-last in the ACC in scoring defense, allowing its opponents 32.2 points per outing. The SU unit wound up getting burned both on the ground and through the air, ranking 12th out of 14 ACC schools in both categories. The Orange also gave up the most yardage per play on the ground in the ACC (5.2 yards), as well as rushing touchdowns (28).

Despite all the bad defensive news, the Orange proved that they’re adjusting well to Babers’ high-octane offense, finishing second, behind only Clemson, in the ACC in passing yardage. Syracuse attempted 55 more passes than any other team in the ACC, but they produced 294.8 passing yards per contest. In addition, the Orange may have found a running back in Dontae Strickland. The junior had three straight games with at least 78 rushing yards against Pitt, Clemson, and Miami in October before getting hurt later in the season.

With Rex Culpepper getting his first action under center, the Orange scored 43 points against Wake Forest. Although Culpepper struggled against Louisville with two interceptions, he played well in the regular season finale against Boston College, completing 24 of 34 passes for 280 yards and two touchdowns with just one pick.

The emergence of Culpepper, along with an established veteran quarterback in Dungey, is a positive for the Orange heading into 2018. Although Dungey will return to the starting role when he gets fully healthy again, Culpepper’s continued development will keep him on his toes.

The Orange proved in 2017 they can step on the field and play with anybody, particularly in the Carrier Dome. With as many as 15 to 16 starters returning, the Orange could be one of the breakout teams in the ACC in 2018. But only if they learn valuable lessons from some of their shortcomings this fall, and find ways to play a full 60 minutes each and every time they step onto the field.