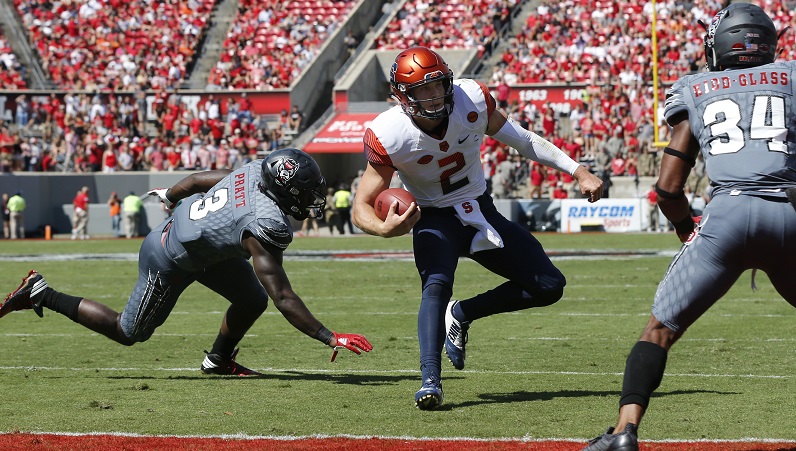 Franklin is the first three-time captain in modern Syracuse football history and the second in the 128-year history of the program (Robert Adams, 1894-96). A three-year starter at middle linebacker, Franklin is second on the team with 40 tackles. He has started 33 consecutive games for the Orange and ranks fifth among active ACC players with 266 career stops.

Bennett leads Syracuse with 56 tackles on the season and ranks fourth in the conference in tackles per game (9.3).

Ishmael is the national leader in receptions (56), receptions per game (9.3) and receiving yards (729). He opened the season with five consecutive 100-yard receiving games to tie the school record. In 41 career games, Ishmael has 170 catches for 2,273 yards and 14 touchdowns. He ranks third on the Orange’s career receptions list and fourth all-time in yards.

Hofrichter is the fifth sophomore captain in team history, a list that includes Franklin (2015), Angelo Acocella (1945), Joe Alexander (1918) and Robert Adams (1894). The second-year punter is currently third in the ACC and 14th in the FBS in punting average (45.1). He also ranks third in the league in number of punts downed inside the 20-yard line (12).

Keller is Syracuse’s snapper for both punts and placement kicks. He is responsible for initiating a Syracuse punting operation that ranks sixth nationally and first in the ACC in net punting average (43.0).

Prior to last week’s vote, captains rotated on a game-by-game basis for the first five weeks of the season.