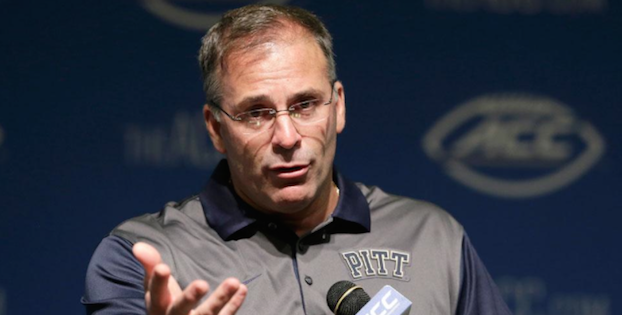 Pat Narduzzi's 2016 class is ranked No. 34 in the country according to 247Sports Composite rankings. (AP Photo)

Pittsburgh added two more players to its 2016 recruiting class over the weekend with linebacker Elias Reynolds committing to the Panthers on Saturday and defensive tackle Amir Watts giving his verbal to the Pitt staff on Sunday.

A native of Brooklyn, New York, Reynolds was previously committed to Rutgers but reopened his recruitment after head coach Kyle Flood was let go by the Scarlet Knights in November. He is the third player in his class to flip from Rutgers to Pitt in the last couple months, joining safety Phil Campbell and offensive lineman Justin Morgan.

Reynolds is rated the No. 74 outside linebacker in his class according to 247Sports Composite rankings. He was originally offered by the Panthers in April 2015.

Although Watts had been among the top targets on the board for Pitt over the last several months, he was a Western Michigan pledge when his contact with the Panthers’ staff heated up. He continued to rack up Power 5 offers after decommitting from the Broncos in August.

Watts’ commitment to Pat Narduzzi’s staff came after the defensive tackle took an official visit to Pitt over the weekend. The Chicago standout is rated the No. 367 senior nationally on the 247Sports Composite.

With Reynolds and Watts on board, Pittsburgh has 21 players committed to its 2016 class.