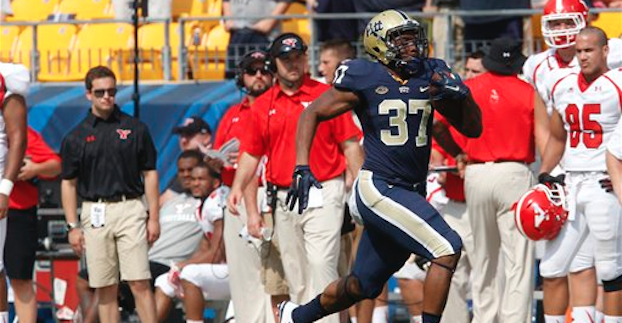 Qadree Ollison was clutch on fourth down for the Panthers in 2015. (AP Photo).

Pittsburgh lost the most important part of its offense on Saturday when James Conner left the game with a season-ending MCL injury. Not only does the injury mean that Conner will no longer have a shot at repeating as ACC Player of the Year, but it also leaves an enormous hole in the Panthers’ backfield.

Ollison rushed for 207 yards and a touchdown — all in the second half — after Conner went down against Youngstown State, which partially explains why he gets the nod this weekend. James, who came out of the opener banged up, served as Conner’s primary backup last season, averaging five yards per carry. While Hall received limited touches in his rookie debut, he arrived at Pittsburgh this summer as a highly touted back and could become an important part of the Panthers’ future.

For now, we’ll let you be the coach.