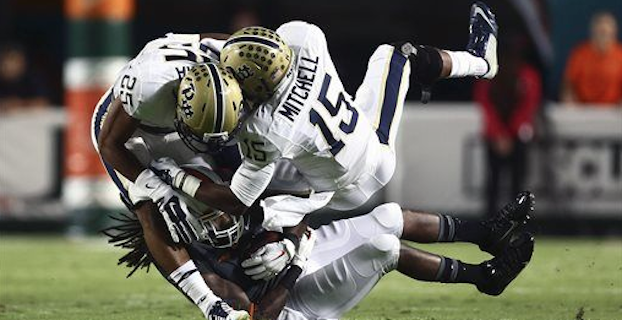 On if anything stood out after reviewing the scrimmage tape:

“Nothing technically. Where I think we’re at as far as what we’re doing schematically, I think we’re making the steps we need to make. I’m really impressed right now with their willingness to compete every time. We’re trying to get them in different situations whether it be red zone or third down. They’re trying to win the drill, which is really encouraging to see. They’re also trying to win their individual job. Their work ethic is there, their fight is especially there. They were enthusiastic the day after we jumped on them a little bit. They’re responding and that’s what you want to see.”

On the boundary safety battle between Pat Amara and Jevonte Pitts:

“They’re battling it out. I think Pat [Amara] didn’t take as many reps as Jevonte [Pitts] did last spring. He’s closing the gap a little bit, but it’s just back and forth every day. Pat hasn’t done anything right now to take the job over, but he’s doing what he’s supposed to be doing. He just has to continue to make steps and make the plays he’s supposed to make. Again, feeling. You’ve got to feel it out there. The other guy at that position is Jordan Whitehead. We can’t forget about him. He’s had a little bit of a lesser day-to-day in terms of thinking of what he’s doing in terms of skills and stuff, but he’s getting there.”

On Jevonte Pitts and how he spent his summer:

“He’s a guy that came in and I thought he was in really, really good shape. He was ready to go athletically. Mentally he’s there, and he’s brought it every single day.”

On when he thought Dennis Briggs could make the conversion from running back:

“I think he’s a smart guy. I think he’s a gifted football player. I think he’s got a feel for the game, and he just took the skill set over there as far as the running back positon. It’s a change of direction, like I said, short area quickness. He’s a humble guy. I love his approach, he is a humble guy. He approaches it the right way. He does what he’s told. He’s very quiet, but he takes in everything you’re saying all the time and really tries to apply it. I didn’t know if he would get there after spring ball, but he has and we just have to continue to help teach him how to become more of a production player at that position.”

On the next step for Jordan Whitehead:

“The next step for him is getting it down mentally. Physically, he has the skill set. The college game is different, though, because of the workload over the course of time. He’s got to take care of himself. Mentally, as long as he can push through that barrier that he’ll hit probably Wednesday or Thursday—because we’re going to keep adding defense in—if he can push through that, he’ll have a chance to give us quality reps even maybe that first week.”

On Jordan Whitehead and whether the understanding must come first:

“I’ll tell you this: when you go out and get into a situation where you do a live scrimmage and you look at his grade sheet, his technique was not always perfect. His alignment and his assignment was not always perfect, but he had a lot of production points. At the end of the day, production is always going to be the number one key factor. He can make up for it as long you’re not giving up the critical errors or the big plays. Production is what makes the most difference. So the guys who produce are going to be on the field.”

On Dennis Briggs moving from running back to corner and playing nickel back:

“We kind of see him as our army switchblade. He can do multiple things for us. He can go inside, outside, and play in the back at the safety position. We need to develop depth, and he’s one of those guys that we feel like can play multiple parts on this defense.”

On developing depth at corner:

“We’re definitely trying to do that. We have guys rotating in, trying to get as many reps as we can. Like I mentioned, Dennis [Briggs] is doing it all. He’s going from the corner to the nickel, and I’ve also been telling him to eye up the playbook for the safety position just because at the next level, as well as this level, the more you can do definitely helps. God forbid somebody goes down, we want to have enough depth and enough quality guys to roll in and keep us going. So, we don’t want to slow down our pace. We just want to continue to work and know that the next guy will be ready to go.”

On his safety position battle with Pat Amara:

“Every day is a competition. Every single day. You’ve got to take pride in it.”

On taking advantage of a clean slate in the spring and applying it now:

“You’ve got to take advantage of every opportunity, go harder every day and worry about finding something you can be better at.”

On if he’s been more focused this summer than in the past and why:

“For sure, because I knew I had an opportunity.”

On his relationship with Pat Amara:

On how he would describe freshman Jordan Whitehead:

On what advice he’s given Whitehead:

“When you get into college football, coming in as a freshman, you don’t get as many reps as everybody else like the older guys. I try to tell him, ‘You’ve got to take advantage of the reps that you see. Like everybody else, you’ve got to capitalize on my mistakes.’”

On what he thinks his strengths are:

On how switching from running back to defensive back came about:

“I was actually in the weight room and the thing that was going on was I was kind of in the middle of the depth chart with the running backs. Obviously we have James [Conner], we have Chris [James], Rachid [Ibrahim] and other guys who have some experience. The coaches were just looking for ways to kind of use the guys who weren’t getting a lot of play, spread them out and see what they could do at some of the impact positions. They knew I had played defensive back in high school, so they said I could take a shot. [The coaching staff] said I might be able to do it, so they just asked me if I wanted to. Then I came to Coach [Narduzzi] and told him that I wanted to and when we started spring ball, they tried me out at corner for the first day.”

On how the transition went:

“I had problems with it. I didn’t have a problem doing it, but it was a tough transition at first. But I feel a lot more comfortable starting off in the fall. In the spring there was a huge learning curve, especially at the nickel back and corner positions. Like I said, I had done it before, so I was just getting used to getting my footwork back and everything like that. It’s stuff that I knew from high school, but I hadn’t done it in a while because I became a running back. Other than that, that’s how it came about.”

On how hard it’s been to change positions mentally:

“It’s been a lot better starting off at camp. Once I got the summer break, I got a chance to kind of dive into the playbook and get out here with the guys, work on stuff on my own and get comfortable with it. I really made a big jump there. I don’t believe I’ve had a lot of mental mistakes starting off camp. Spring ball was tough for me because we were getting evaluated and I was learning at the same time. So, during that period it was kind of tough for me. I was making a lot of mistakes. But starting off camp, mentally I’ve been feeling pretty good.”