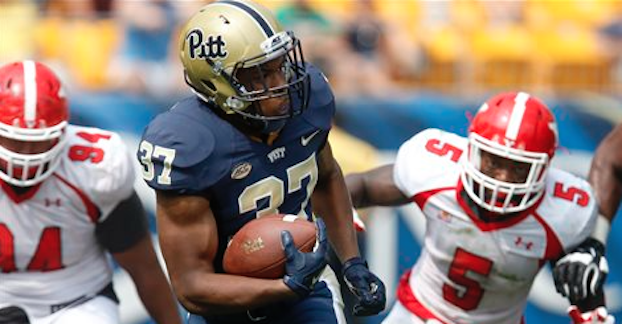 PITTSBURGH (AP) — Pittsburgh running back Qadree Ollison insists he has no problem sitting third on the depth chart behind James Conner. Conner, after all, is a star and the reigning ACC Player of the Year. Ollison is a redshirt freshman simply trying to find his way.

That way led to the school record book on Saturday and almost certainly a higher spot in the pecking order.

With Conner limited with a minor right knee injury and wide receiver Tyler Boyd serving a one-game suspension, Ollison ran for 207 yards and a score as the Panthers and first-year coach Pat Narduzzi narrowly avoided a second-half meltdown in a 45-37 victory over Youngstown State.

“Coach Narduzzi is always preaching next man up and we always preach that in the running back room,” Ollison said. “We’re all about equal to each other. We believe anybody can go in there and get the job done if James goes down.”

Conner scored on runs of 13 and 4 yards in the first quarter before tweaking his right knee. Narduzzi held the junior out as a precaution, relying instead on the 6-foot-2, 230-pound Ollison, whose rushing total was the highest ever by a Panther in his debut.

Pitt needed just about every one of those yards to avoid being upset by the Penguins for the second time in four years. Youngstown State stunned Pitt in the 2012 opener to spoil Paul Chryst’s first game in charge with the Panthers. The Penguins and new coach Bo Pelini didn’t quite get there this time, giving Narduzzi — whose father Bill coached the Penguins from 1975-85 before getting fired — a small measure of revenge.

Hunter Wells passed for 274 yards and a touchdown for FCS-member Youngstown State, which never led over the final 50 minutes but hung around until the final seconds.

Jody Webb ran for 127 yards and two scores, including a 75-yard sprint with 4:24 to go that brought Youngstown State within eight. The Penguins got the ball back with a chance to tie with under 3 minutes to go but managed just two yards in four plays, with Wells throwing incomplete to Andrew Williams on fourth down.

“We did some bone-headed things,” said Pelini, hired last December to return to his hometown after seven eventful seasons at Nebraska. “We missed some tackles on defense. We made enough errors, some first-game errors, enough to hurt us. And there’s your result.”

The Panthers benefited by a pair of fortunate bounces. Avonte Maddox bumped into teammate Lafayette Pitts while receiving a kickoff late in the first half. The ball hit the ground but Maddox scooped it up on the bounce. The exchange seemed to disrupt the timing of Youngstown State’s kickoff coverage and Maddox raced down the right sideline to give the Panthers a 24-13 halftime lead.

“I tried not to panic at all because that’s not good if you’re panicking,” Maddox said. “When it hit the ground I had to hurry up and get it.”

Youngstown State had sliced the deficit to 31-23 early in the fourth quarter when Pitt again caught a break. Elijah Zeise and Scott Orndoff were running free in the Penguins’ secondary when Chad Voytik lofted a pass that somehow managed to hit both of them. Orndoff touched it last to complete a 55-yard touchdown and restore a cushion the Panthers ended up needing every bit of.

“I think Scotty saved me there,” Voytik said.

The throw was the lone highlight for Voytik, who completed just 9 of 14 passes for 72 yards with a touchdown and an interception Youngtown State’s LeRoy Alexander returned for a score.

Pitt’s defense gave 407 yards but also recorded six sacks, including one by Zack Poker on the game’s penultimate snap. Narduzzi, who landed his first head coaching job with the Panthers after spending nearly a decade as the defensive coordinator at Michigan State, will take it.

“Your two best players are sitting on the sideline, it’s a tribute to our players that we came out and got it done,” he said.