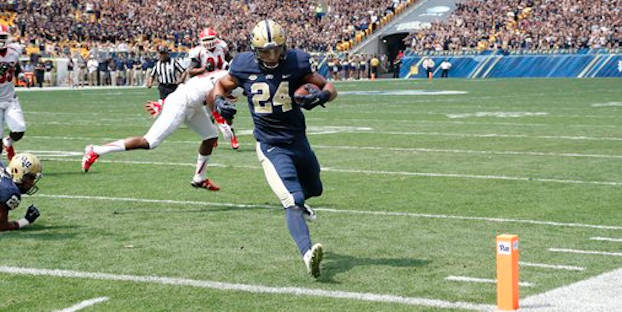 It looks like we could see James Conner at receiver in 2016. (AP Photo).

Reigning ACC Player of the Year James Conner will miss the remainder of the 2015 season with a torn MCL, head coach Pat Narduzzi announced on Monday. Conner rushed for 79 yards and two touchdowns on eight carries in the Panthers’ 45-37 win over Youngstown State on Saturday but left the contest in the second quarter with the knee injury.

“Even with all of his success last year, James attacked his preparation for this season like he was fighting to earn a starting spot,” Narduzzi said. “He is a tremendous competitor and teammate.”

“I greatly appreciate everyone’s support and well wishes,” Conner said. “This is a temporary setback and I’m going to work even harder to bounce back. Even though I won’t be able to play this season, I’m going to be right beside my teammates and help them every way I can to have a great season.”

As a sophomore in 2014, Conner rushed for 1,765 yards and an ACC-record 26 touchdowns. Despite only catching five passes for 70 yards last fall, first-year head coach Narduzzi repeatedly stated in the offseason that he planned to get Conner more involved in the passing game.

The loss of Conner is the second major hit Pitt’s backfield has suffered in recent weeks. In late August, co-backup running back Rachid Ibrahim was lost for the year with an Achilles injury.

With Conner out, redshirt freshman Qadree Ollison and sophomore Chris James will likely see significant action. In the season opener, Ollison received 16 carries and churned out 207 yards and a touchdown on the ground. James ran the ball seven times for 32 yards.

True freshman Darrin Hall, who also saw the field against the Penguins, will be in the mix for touches, as well.