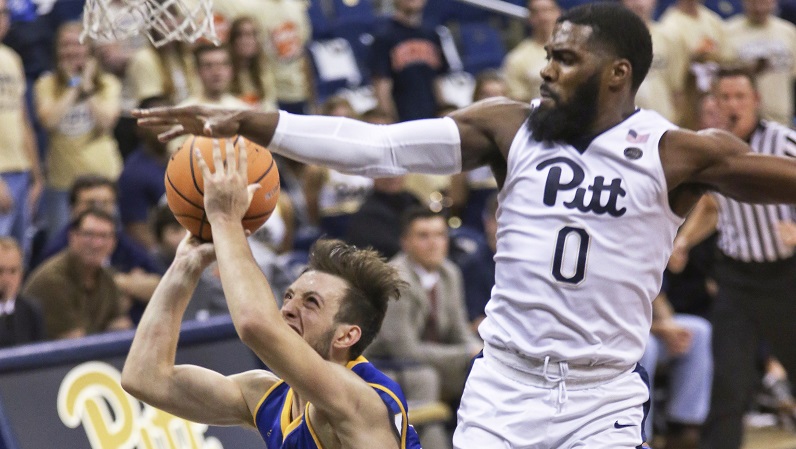 With massive roster upheaval and a large number of unproven commodities at the major college level, Pitt basketball is settling into what will undoubtedly be a rebuilding season. The Panthers suffered disappointing losses to Navy and Montana in their first two games before beating UC-Santa Barbara on Nov. 15. What are some of the early positives for Kevin Stallings’ squad as the season gets going?

The emergence of Jared Wilson-Frame

With so much attrition from the 2016-17 season, the Panthers needed one of its veteran transfers to make an impact. So far the biggest impact has come from Jared Wilson-Frame, a junior wing. Wilson-Frame led Northwest Florida State College in scoring a year ago, leading the team to a 29-5 record and a berth in the Final Four of the National Junior College Athletic Association Tournament.

Wilson-Frame has come out of the gate playing well, averaging better than 16 points per game while connecting on six 3-pointers. He’s also blocked a couple of shots. For Pitt to have any chance of being competitive in the ACC this winter, they need Wilson-Frame to consistently play the way he has over the course of the team’s first handful of contests.

The consistency of Ryan Luther

Senior Ryan Luther, one of the few remaining ties to the Jamie Dixon era at Pittsburgh, will be heavily relied on this winter by the Panthers. Luther averaged 15 points and 9.7 rebounds through Pitt’s first three games, picking up a pair of double-doubles against Montana and UC-Santa Barbara.

Although Luther has room to pick up his shooting percentages, he’s averaging well over 30 minutes per game, which gives him ample opportunity to make his numbers look even better. Luther showed his outside scoring capability against UC-Santa Barbara, burying three 3-pointers in four attempts. With such a thin rotation of experienced players, Luther’s production is essential for Pitt every time they step out on the floor.

Marcus Carr and Parker Stewart at the free throw line

Freshman guards Marcus Carr and Parker Stewart have arrived at Pitt at a uniquely good time, when they can make a significant early impact. Predictably, there’s been some initial growing pains. Carr made just five of his first 20 field goal attempts for the Panthers, while Stewart made just two of his first 12 3-pointer attempts. But Carr and Stewart have proven highly effective in one key area. Free throws.

Through three games, Carr was a perfect nine-for-nine from the free throw line. He also connected on 43.7 percent of his 3-pointer attempts (three-of-seven). Stewart made nine of his first 10 free throw attempts.

As a team, Pitt has struggled out of the gate from the charity stripe, shooting just 73.7 percent through three contests. If it weren’t for Carr and Stewart, that percentage would be much worse. But if the Panthers can rely on the freshman backcourt tandem to consistently go to the line and convert, it will lessen the team’s overall offensive burden.