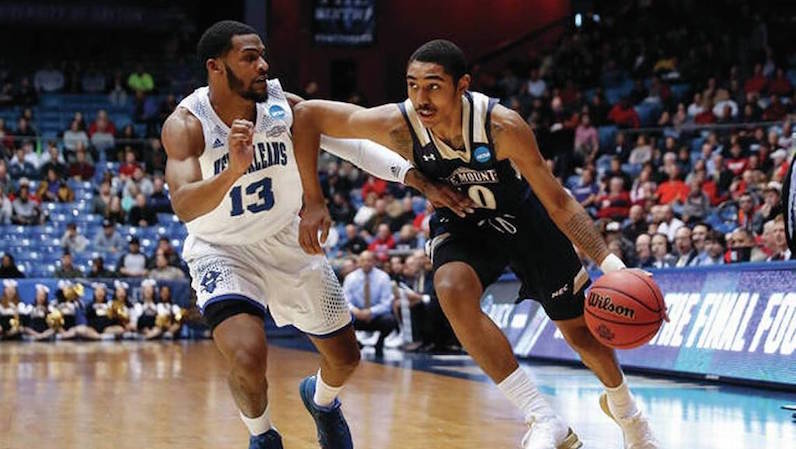 Former Mount St. Mary’s guard Miles Wilson (right) will be eligible to play in the 2018-19 season for Miami after transferring. (AP Photo)

Miami basketball would prefer to not rely on Miles Wilson next season as a critical piece.

That’s not a comment on Wilson’s talent. He has plenty, as evidenced by his performance in the NCAA Tournament two years ago. As a freshman at Mount St. Mary’s, he put up 22 points and seven rebounds against Villanova in a first-round loss, after going for 17 and 11 in the first four against New Orleans. At 6-foot-5 and 190 pounds, he can score.

But Miami needs more than Wilson, who will be eligible following a post-transfer year on the bench. He is one of three scholarship guards returning, a group coach Jim Larranaga must bolster this offseason, preferably with an eligible grad transfer or a ripe-and-ready prep standout. Wilson might be good, but Miami would certainly be better with him as a secondary option.

Imagine a Hurricanes lineup with dazzling point guard Chris Lykes playing next to a scoring combo guard like Florida Gulf Coast grad transfer Zach Johnson, a Miami native who has his hometown school on his short list of options. Wilson, who averaged 11.8 points, 3.9 rebounds and shot 45.4-36.2-74.8 in his year at The Mount, could play with either. UM would have shooting depth off the bench in DJ Vasiljevic (41.1 from outside last year), and would, ideally, add another big wing who can play defense.

Wilson has played six career games against power-conference opponents. Except for the aforementioned Villanova game, that action came on the road as a freshman in November 2016. He acquitted himself fairly well, scoring 11 points back-to-back games at No. 20 West Virginia and No. 20 Iowa State before hitting a wall. Wilson shot a combined 3-for-12 for eight points at Minnesota, Michigan and Arkansas. All of those teams reached the tournament. West Virginia and Michigan made the Sweet 16.

Which is to say Wilson has seen high-level basketball, despite his lack of ACC experience. He is a critical part of Miami’s backcourt, though we can’t measure that until we see the rest of UM’s offseason moves.

If Wilson and Vasiljevic are Miami’s only two-guards on opening night – which seems unlikely, especially given Larranaga’s success in attracting transfers – both of them become crucial. That could a shift to the backcourt for forward Anthony Lawrence Jr. (6-7, 210).

Independent of how Miami uses its expected four open scholarships, Wilson will be on the court plenty, whether he starts or not. As a redshirt sophomore this fall, he’ll be a big part of the roster going forward. If he can avoid getting in trouble like Miami’s last two-guard mid-major transfer (Rashad Muhammad, since dismissed), so much the better. And there is no indication he’s a problem.