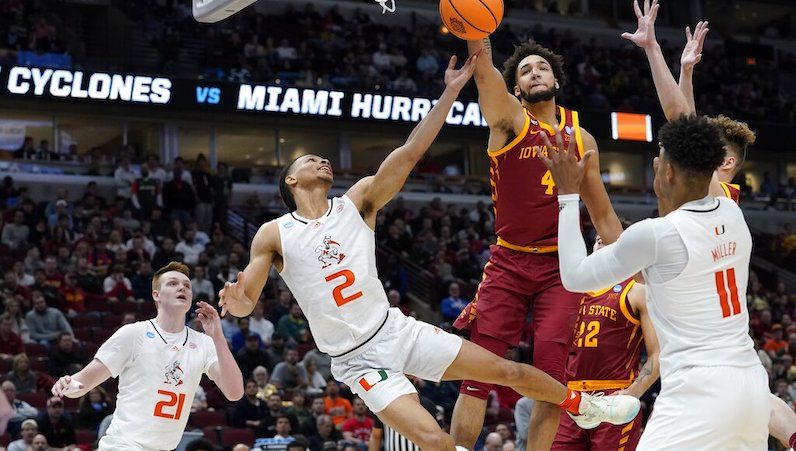 Miami’s Isaiah Wong and Iowa State's George Conditt IV battle for a rebound during the second half of a college basketball game in the Sweet 16 round of the NCAA tournament Friday, March 25, 2022, in Chicago. (AP Photo/Nam Y. Huh)

Earlier this week, Isaiah Wong made news when he declared for the 2022 NBA Draft. However, Wong will make far bigger waves if and when he also enters the NCAA transfer portal. That move, according to his agent, Adam Papas, will come due to dissatisfaction with his current NIL deal.

Wong, an All-ACC performer in 2021 and 2022, and his representation want greater compensation.

May 1 marks the deadline for a player to enter the transfer portal and still be eligible for the 2022-23 season.

Isaiah would like to stay at Miami. He had a great season leading his team to the Elite Eight. He has seen what incoming Miami Hurricane basketball players are getting in NIL and would like his NIL to reflect that he was a team leader of an Elite Eight team.

When Pack committed to Miami over the weekend, it was reported that he negotiated an NIL deal worth $800,000, over two years, and a car. Ironically, that deal was negotiated from Papas, who represents both Wong and Pack.

Pack’s NIL deal was funded by billionaire John Ruiz, a mega-donor for the University or Miami. Ruiz spends big to support Miami athletics. Currently, Ruiz has 111 NIL deal signed with Miami athletes. He was also integral in the school’s pursuit and acquisition of football coach Mario Cristobal.

As Jonathan Givony and Jeff Borzelo of ESPN noted in their reporting, Florida state law doesn’t permit schools to be directly involved in NIL agreements. According to ESPN, Papas stated that he isn’t speaking with Miami’s coaching staff regarding Wong.

Ruiz is aware of Wong’s frustrations; however, he explained to ESPN that Wong is currently under contract. Ruiz also stated that he doesn’t renegotiate.

Less than a full year into the era of NIL, these are uncharted territories for college athletics. Once again, the NCAA falls short in establishing clear, concise guidelines for NIL. As money floods in, along with newfound player movement, there’s still a lot of gray area and uncertainty between what’s acceptable and what isn’t.