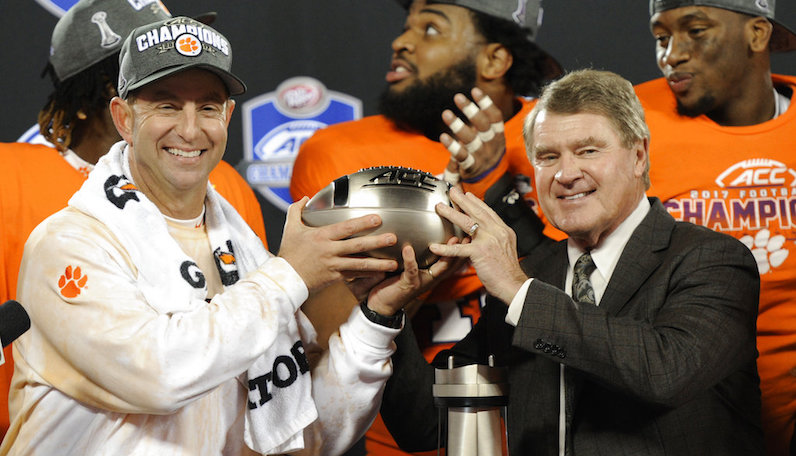 Clemson’s January started off on the wrong foot with its frustrating loss to Alabama in the College Football Playoff semifinals. But in the days and weeks following New Year’s Day, news has trickled out of Death Valley that sets the Tigers up well for another shot at a national championship next season.

First, news came on out Jan. 10 that two-time first-team All-ACC tackle Mitch Hyatt was coming back. Three days later, linebacker Kendall Joseph announced he was returning for his senior season. Also that day, defensive line stalwarts Clelin Ferrell and Austin Bryant declared their intentions to come back to Clemson. On Jan. 15, another defensive line standout, Christian Wilkins, said he was returning to Death Valley as well.

How is Dabo Swinney keeping all this talent at Clemson?

There are three primary factors in the equation. For two of the Clemson players, the opportunity to raise their stock for the 2019 NFL Draft looms large in their decisions to return.

Hyatt struggled at times keeping Alabama’s defensive ends off quarterback Kelly Bryant in the CFP semis. The former 5-star recruit is still considered by many a viable NFL offensive tackle prospect. But his return to Death Valley in 2018 will give him a chance to play himself into a first round selection. That was not a likely scenario this spring.

Joseph, who recorded 98 tackles for the Tigers in 2017, is in a similar situation as Hyatt. He wasn’t a likely first round pick, and he will be positioned well for an All-ACC season and a chance to raise his profile.

For the defensive linemen returning to Death Valley, the chance to return to Clemson and challenge for another national championship seems to be the key motivating factor. There seems to be a collective incentive to return and right the wrong of what happened Jan. 1 in the Sugar Bowl. They will also have a chance to win a fourth straight ACC title. That hasn’t been done in the league since Florida State won or tied for nine straight ACC regular season crowns from 1992 to 2000.

A third, less discussed but nonetheless important factor, is the culture that Dabo Swinney has built at Clemson. These players feel at home there. It’s not merely a bus stop to the pros. Swinney does things like dance with his players and wear Rastafarian hats before practice to keep them loose. These players enjoy being at Clemson with Swinney. They like him enough that they were willing to hold off a year on their pro dreams for one more year in the college spotlight.

All the while, Clemson has managed to retain its coaching staff. Coordinators Brent Venables, Jeff Scott, and Tony Elliott all received overtures from other schools. But they’re still in Death Valley, making preparations for spring workouts.

Swinney is keeping his coaching staff intact because he’s taking care of them. He takes care of them as a leader and as a boss, but he’s also making sure they’re taken care of financially.

Defensive coordinator Venables made $1.7 million this past season – more than a lot of FBS head coaches make in the non-Power Five conferences. Offensive co-coordinators Scott and Elliott both made $800,000 in 2017 – a raise of $175,000 each after winning the national championship the year before.

Swinney has found a winning formula at Clemson by retaining his coaching staff and recruiting at a high level. Combined with his personal charm, Swinney has a core of tremendously talented young people surrounding him. Now that the Tigers are again perched among the nation’s elite, Swinney is doing a remarkable job of keeping everyone focused on working together to attain even more success.

Read more: What Clemson will miss with Ray-Ray McCloud headed to the NFL