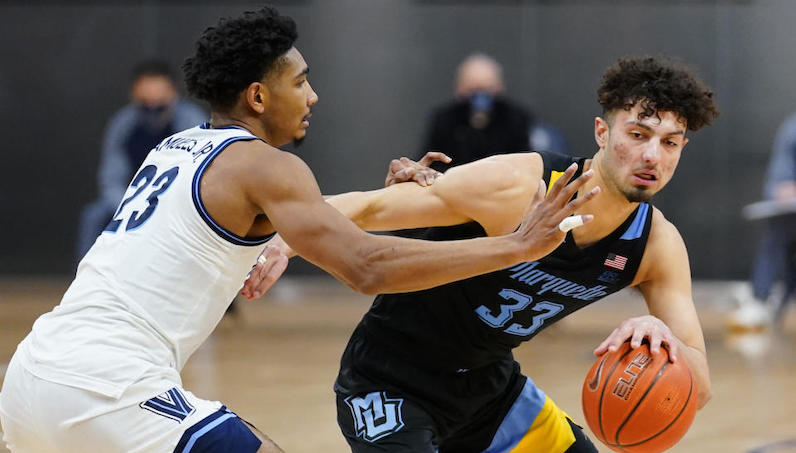 According to a report from Sherrell McMillan of Inside Carolina, talented Marquette big man Dawson Garcia is on an official visit at North Carolina — Thursday, July 1.

Since then, though, he’s explored a variety options. Back in April, Garcia announced his plans to test the NBA Draft process. Recently, Garcia competed in the G League Elite Camp, where he played quite well. However, he didn’t receive an invite to the NBA Combine.

Looking back at the G League Elite Camp scrimmages and continue to be impressed with Dawson Garcia. Did a great job of defending in space and sticking onto driving guards. That movement + his upside as a shooter makes him an interesting prospect.

Last week, Garcia quickly became the top name in the transfer portal. He visited Illinois earlier this week; other power programs have taken an interested, too, including Arizona, Minnesota, Texas (ironically) and Oklahoma State. (The Andre Curbelo-Garcia two-man game at Illinois would be really fun.)

For now, though, Garcia will keep all of his options open. He remains in the 2021 NBA Draft pool; Garcia has until July 7 to remove his name if he chooses. Garcia could also return to Marquette and play for Smart; that’s a possibility, too.

UNC and Roy Williams offered Garcia a scholarship back in 2019; however, a commitment from Garcia at this stage would be even more significant. (The commitment of Walker Kessler to UNC in Sept. 2019 may have been one of the things that have pushed Garcia away from Chapel Hill during his prep days. Basketball is a small world.)

Garcia is a big-time player. If he returns to college basketball, it will be as one of the best players in the country. The addition of Brady Manek was huge for UNC, but if Garcia commits to North Carolina, he’ll absolutely start alongside Armando Bacot. In fact, Garcia would enter the season as a legit candidate for ACC Player of the Year.

While Garcia may look like a power-post player (0.89 points per post-up possession), there are numerous components to his game. According to Synergy Sports, Garcia scored 0.91 points per pick-and-pop possession (48.4 eFG%). That valuable frontcourt stretch component adds critical spacing to any secondary action or half-court set.

Sophomore point guard Caleb Love, who struggled to get paint touches with his handle, would really stand to benefit.

Love’s lack of burst and inability to separate in 1-on-1 situations are concerns, but North Carolina’s cramped offense did him no favors, though.

UNC could deploy Garcia in ways similar Manek (which I wrote about last month); however, there’s far more playmaking and two-way upside with Garcia. When Bacot sits, hypothetical lineups with Garcia, Manek and Kerwin Walton — one of the top spot-up shooters in the country — would be an absolute bear to defend, too.

Garcia would instantly open up a variety of 5-out looks on offense — if Hubert Davis wanted to go in that direction. Garcia has a nice handle for a player his size and bulk. When opponents hard close on his jumper, Garcia can put the ball on the deck, use his strength and score.

Even in isolation situations vs. smaller wing defenders — without any previously-created advantage — Garcia was able to drive and finish at the basket. Nearly half of his field goals at the rim came unassisted. (Of course, put-backs factor into that calculus, too. Garcia shot 65.4 percent on put-back attempts this season, per Synergy.)

On this possession, Garcia gets an angle for a finish over Cade Cunningham, the No. 1 prospect in the 2021 NBA Draft.

Creighton’s Damien Jefferson is a power wing and a solid defender; he ranked fourth in the Big East this season in Evan Miya’s DBPR metric. However, Garcia is still able to work the matchup for a tough bucket vs. a set defense: jab, drive right with his non-dominant hand and a strong finish over Jefferson and Christian Bishop.

Given his shooting gravity and handle, Garcia is a natural fit in any kind of dribble-handoff action, too. This type of activity would fit seamlessly with Walton, although Love would likely be the most frequent recipient.

While Garcia lacks some pop in terms of vertical bounce, he’s still a solid paint finisher. Despite recording only two dunks this season, Garcia shot 64.2 percent at the rim, according to Bart Torvik’s shot data.

The Tar Heels saw this up close and personal — Garcia dropped 24 points (8-of-9 2PA) during a win over UNC in Chapel Hill back on Feb. 21.

Garcia blocked only 0.6 shots per 40 minutes this season, which gets back to his lack of lift. But he still moves well and can use his length to deter rim attempts. At the G League Elite Camp, Garcia measured out with a wingspan just shy of 6-foot-11 and a standing reach of 8-foot-11. The standing reach measurement is especially encouraging.

There are good flashes of weak-side rim protection, and there’s no questioning his motor, either. Garcia will make hustle-type winning plays.

On offense, Garcia can run rim-to-rim. Those early-offense rim runs are an efficient way to hunt points, and would fit nicely in North Carolina’s go-go offense. (Garcia as the trail man in the secondary break, with Bacot running the lane, would be an excellent look for the Tar Heels as well.)

Even as a freshman in ball-screen coverages, Garcia showed some ability to switch out and defend elite college guards in space, including Marcus Zegarowski of Creighton, another NBA prospect. (Although Zegarowski had a tough showing last week at the combine.)

Garcia’s movement would be crucial for a defensive fit with North Carolina. A Bacot-Garcia frontcourt isn’t the best in terms of foot speed, although it has serious offensive potential and would do damage on the glass. North Carolina could stay big, while spacing the floor on offense.

The recruitment of Garcia should move quickly; he’s too good and, more specifically, within the next week, there will be a firm decision on the draft. At the moment, the Garcia-UNC partnership exists only as a hypothetical.

If Davis is able to pull this off, though, it’s a super-charger for North Carolina’s 2021-22 season. High-end team outcomes would jump a level. Garcia would instantly raise both the floor and ceiling for UNC, and as we all know: the ceiling is the roof.