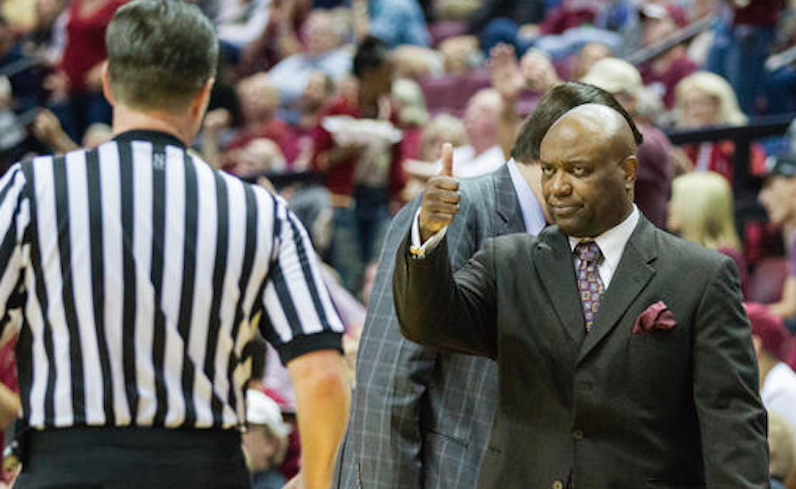 Tip-off time is finally here for Florida State on the hardwood and after a disappointing football season, basketball season might be a welcomed thing in Tallahassee.

Fresh off a 26-9 finish and a first appearance in the NCAA Tournament in five years, FSU comes into the 2017-18 season with more questions than answers. Perhaps the biggest is how the Seminoles will replace their top three scorers, which includes two NBA draft picks and a lottery pick in forward Jonathan Isaac.

Putting the ball in the basket

Terance Mann, who was an efficient fourth option a year ago, will probably take on a bigger role in the offense as will a pair of sophomore guards.

Expect Trent Forrest and CJ Walker, who are both extremely talented, to see the biggest jumps numbers-wise. As freshmen last season, the two played behind the likes of Bacon and Rathan-Mayes respectively. Both have a world of talent. Forrest, like Mann, does a number of things well, but expect him to take the biggest step this season as a scorer. Walker may be the first pure point guard – as in a distributor first – that FSU has had since Luke Loucks.

As far as offense goes, don’t be surprised if M.J. Walker, a true freshman and McDonald’s All-American, leads the team in scoring. If that happens, Walker would be the third freshman to lead FSU in points per game in four seasons. Prior to the 2015-16 season, the Seminoles had never had a one-and-done. Walker has the potential to give FSU its third in as many seasons.

M.J. Walker will be a huge part of what Florida State does this coming season, but don’t expect him to be the only freshman to make a significant impact.

Under head coach Leonard Hamilton, FSU has always been known for its size and Ike Obiagu to continue that tradition. A 7-foot-1 true freshman, Obiagu may already be an upgrade for the departed Michael Ojo, who put together a solid senior season last campaign.

In last Tuesday’s exhibition, Obiagu finished with team-highs of 12 points, seven rebounds and four blocks. Obiagu already moves better than Ojo, is more athletic and more skilled offensively. He’s the real deal and FSU is lucky to have him. He’ll split time at center with 7-4 Christ Koumadje.

RaiQuan Gray, a 6-8 forward with good range, will also be a nice piece for FSU. Combo guard Anthony Polite and versatile small forward Wyatt Wilkes are also competent freshmen who should compete for minutes.

With Rathan-Mayes, a three-year starter at basketball’s version of quarterback, and two-time leading scorer Dwayne Bacon gone along with experienced seniors in Jarquez Smith and Michael Ojo, the Seminoles will be looking for someone to lead this season. Mann is a candidate to man that role, but so are a couple of junior college transfers.

Braian Angola-Rodas and PJ Savoy are each in their second season with the program, but could be leaders of a young team moving forward. Angola-Rodas is one of only two scholarship seniors, along with forward Phil Cofer, but got valuable experience playing for the Colombia National Team this offseason. Savoy is a sharpshooting junior, but has the high-intensity motor that FSU will need.

It’s unlikely that Florida State will chase a school-record for wins this season or be the No. 2 seed in the ACC Tournament, but the opportunity to get back to the NCAA Tournament is very real. The Seminoles certainly have the depth, size and athleticism to get there, but with a tough schedule, they will have to find a way to put the ball in the basket.

M.J. Walker is expected to carry much of that load, but others like Mann, Forrest and CJ Walker are going to have to take the next step. Newcomers like Gray and Obiagu also have to be ready to play.

Read more: CJ Walker gets the keys to FSU’s offense