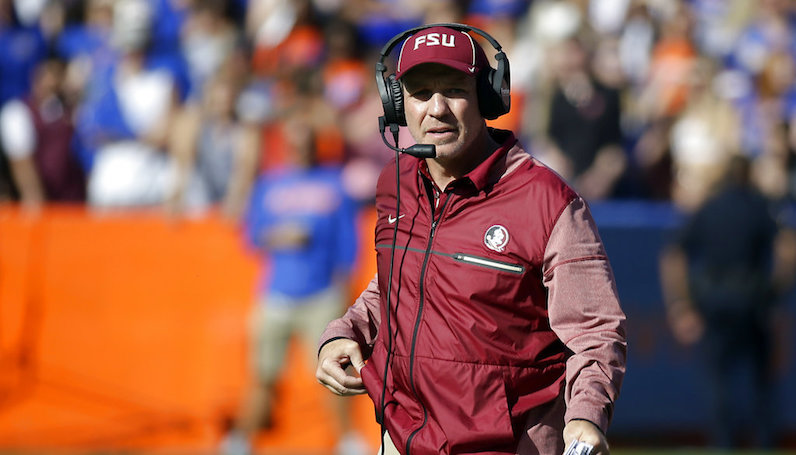 Ah, yes. The coaching carousel continues to spin. The latest bit of news comes as little surprise: Jimbo Fisher will become the head football coach at Texas A&M. After eight seasons at Florida State, Fisher will leave Tallahassee. He’s resigned from the program, and will accept the job in College Station.

Fisher’s angst started to play out publicly a few weeks ago when reports leaked out that he was interested in the Texas A&M job. Whether that was Jimbo trying to get leverage on a raise at FSU or not, it didn’t bode well in the midst of a lost season.

Things reached a crescendo this week — with many outlets reporting that Fisher was not expected to return to Florida State. Now, that’s been confirmed.

Jimbo Fisher went 83-23 at Florida State; back in 2013, he helped the program capture the national championship. The Seminoles went 14-0 that season.

As drama played out this week, three players decommitted from Florida State.

Several names have already been tossed out as possible Jimbo replacements: Scott Frost, Jeff Brohm, Willie Taggart and Lane Kiffin — among others.

Florida State is schedule to play Louisiana-Monroe this Saturday; kickoff is set for noon. Unsurprisingly, Fisher will not coach that game, per ESPN’s Mark Schlabach.

Jimbo Fisher has resigned as FSU's coach and will be named the new coach at Texas A&M, sources told ESPN. He will not coach in Saturday's regular-season finale against Louisiana-Monroe. FSU is planning a news conference for this afternoon

Dave Doeren turns down the Tennessee offer, will remain at NC State