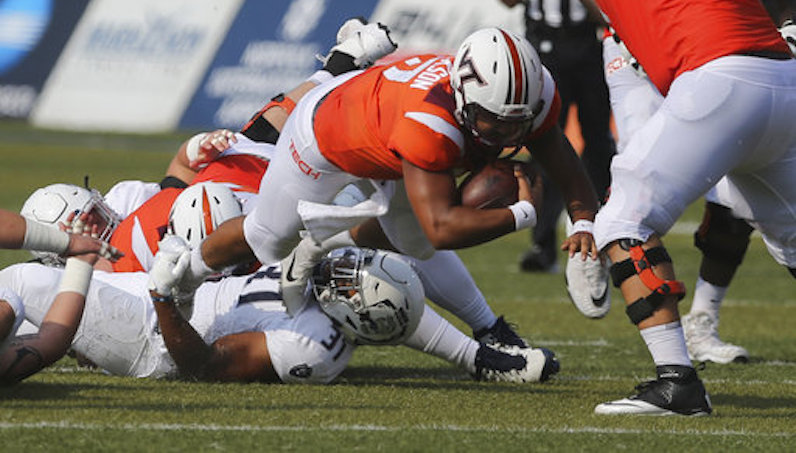 Virginia Tech's Josh Jackson dives for a first down after being tripped up by Old Dominion's Sean Carter during the first half of an NCAA college football game, Saturday, Sept. 22, 2018, in Norfolk, Va. Old Dominion won 49-35. (AP Photo/Jason Hirschfeld)

It’s been a rough few days for Virginia Tech football. First, the Hokies lost on the road at Old Dominion. The next day, Tech dismissed Trevon Hill — the team’s top pass rusher. And now today, more bad news, courtesy of Norm Wood at the Daily Press: Quarterback Josh Jackson will undergo surgery for a torn fibula on Tuesday (Sept. 25).

He’s out indefinitely and could miss the rest of the 2018 season.

Jackson was injured during Virginia Tech’s surprising loss to ODU. With about 13 minutes left and the game tied at 28, Jackson carried the ball for 19 yards, was tackled and struggled to get up. He was replaced by Ryan Willis.

According to Virginia Tech coach Justin Fuente, Willis will start for the Hokies on Saturday at No. 22 Duke. Willis, a transfer from Kansas, threw for 131 yards (9-of-18 passing) and a touchdown against the Monarchs in relief of Jackson. In two seasons with Kansas, Willis made 10 starts and threw for 11 touchdowns (17 interceptions) and over 2,500 yards.

After a solid redshirt freshman season in 2017 — and an interesting offseason — Jackson was in the midst of a productive 2018 campaign: 62.1 percent completion rate, 9.9 yards per attempt and six total touchdowns.

Virginia Tech may need to rely more on a rushing offense that, through three games, has bee pretty good: 245 yards per game and 5.4 yards per carry.

With the return of 7-footer Mark Williams, Duke basketball brings back one of the more…