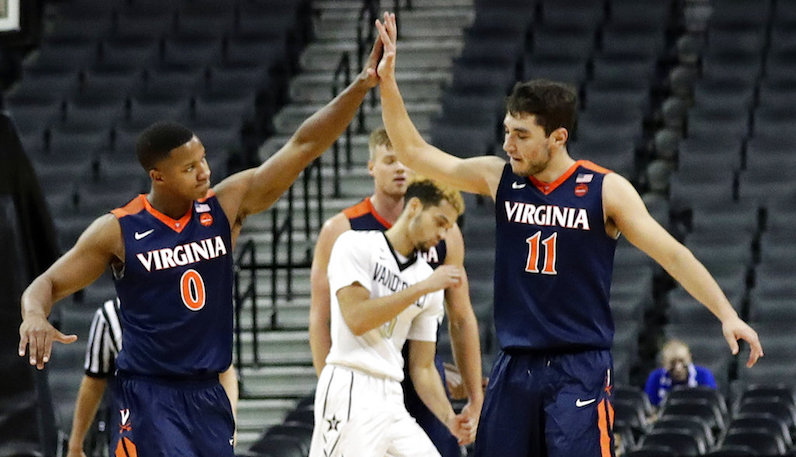 The question, really for the past few seasons, was who would take over at point guard for Virginia once four-year starter London Perrantes exhausted his eligibility? Even into the offseason, when it was pretty clear Ty Jerome was the heir apparent, there was plenty of consternation about depth at the position.

Well, it turns out the Cavaliers have plenty of players who can handle the point. But nine games into the season with ACC play approaching, the question now is who is UVA’s best point guard.

Jerome has been adequate, but perhaps not quite as good as many Cavaliers loyalists hoped as he’s struggled a bit with his shooting. But Jerome is one of five Wahoos averaging between 1.9 and 2.7 assists per game. Kyle Guy, Devon Hall and Nigel Johnson have all spent plenty of time handling the ball with freshman Marco Anthony also getting scattered minutes at the point.

In recent seasons, Perrantes was clearly the one, even with future NBA wing-turned-point guard Malcolm Brogdon sometimes bringing the ball up the court. But perhaps this is roster better served with a point guard by committee.

Jerome averaged 11.3 points and 4.3 assists over the final three games of last season, but so far this year is averaging just 7.3 points and 2.7 assists. That’s not bad, but perhaps his shooting troubles are a sign Jerome has been asked to do a little too much as a sophomore.

Meanwhile, Guy has improved steadily as a ball handler, and Hall is sort of a poor man’s Brogdon for this team. Both players are more natural shooting guards, but perhaps providing Jerome an opportunity to play off the ball a bit more could get him going offensively.

The addition of graduate transfer Johnson as the Cavs’ sixth man has also taken some of the point guard pressure off Jerome, at times. But Johnson hasn’t been incredibly consistent. He followed up a game with eight assists against Lehigh by disappearing amid the full court pressure in the loss at West Virginia, finishing with one point, no assists and a turnover.

But from here on out, Virginia won’t face a defensive challenge quite like the one Tuesday in Morgantown and having two or more players on the court at any given time who can handle the ball may have something to do with why Virginia has, for the most part, been a better offensive team this season.

We’ve seen programs such as Kansas, Duke and UCLA lean more toward combo guards than relying on one true point. If you don’t have a Perrantes or Trevon Duval it makes a lot of sense.

And it makes all the time wondering about the best possible replacement for Perrantes at UVa seem like a bit of waste.