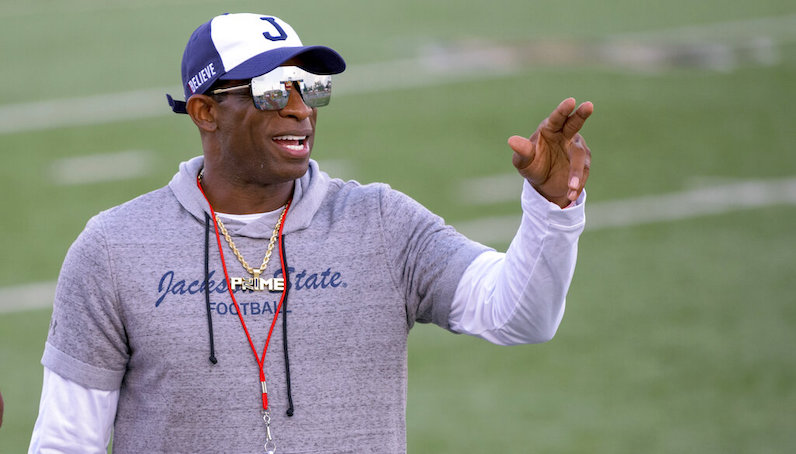 During a busy day in the college universe, the surprise of the afternoon occurred when Travis Hunter — the No. 1 prospect in the 2022 recruiting class — flipped his decision. Previously a Florida State commit, Hunter changed his mind; he’ll now play for Deion Sanders at Jackson State.

Hunter, a native of Savannah (Ga.), initially committed to Florida State back in March 2020, a few months after Mike Norvell was hired.

While other programs had gone on strong in an effort to flip Hunter — most notably, Georgia — the 5-star talent continued to reaffirm his commitment to FSU.

That, however, changed following a visit to Jackson State in November.

Sanders, one of the greatest athletes of the 21st Century, is one of the most important players in program history for Florida State. He’s been the coach of Jackson State, which competes in the SWAC, since 2020.

During the 2021 season, the Tigers finished with an 11-1 record (8-0 SWAC). Under the guidance of Sanders, Jackson State done more than just win on the field. The program has started to really collect talent — both via the transfer portal (several former SEC players) and recruiting from the prep ranks. Jackson State’s 2021 class included multiple 4-star prospects.

Of course, Hunter is another level.

Hunter was the crown jewel of Florida State’s 2022 class; beyond his impact as a (future) player, the 5-star cornerback symbolized a Step In The Right Direction for Norvell. After two seasons in Tallahassee, Norvell has an 8-13 record. While the on-field product hasn’t been great, neither have some of the other issues that have bothered the program.

Within minutes of the decision, a Twitter Spaces with the header “Fire Mike Norvell” was created. For most of the afternoon, the conversation contained thousands of frustrated FSU fans, disappointed about the state of the program under Norvell.