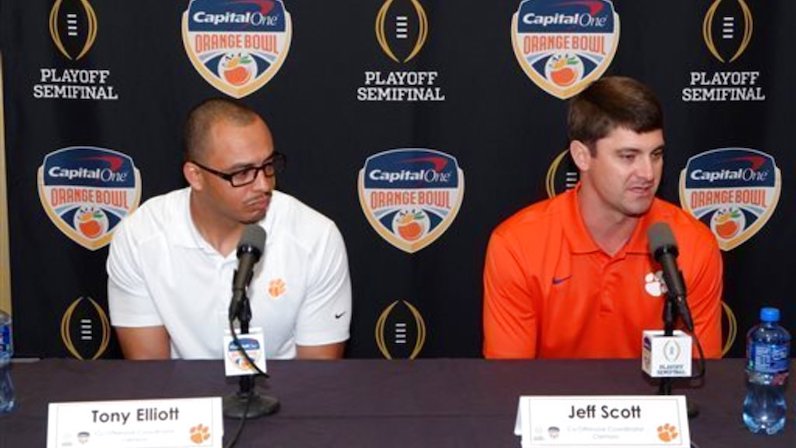 Tony Elliott will become the next head coach of Virginia Football. Or so it seems.

Virginia, led by athletic director Carla Williams, moved quickly; less than a week ago, Bronco Mendenhall was still the team’s coach. However, this searched progressed rapidly, as Virginia worked to land one of the top coordinators and offensive minds in the country.

Per @LarryWilliamsTI, Clemson OC Tony Elliott and his family are on the plane bound for Charlottesville.

After his time with Furman, Elliott moved to join Dabo Swinney’s staff at Clemson — just as the rocket ship was getting ready for takeoff.

During his first four seasons with the Tigers (2011-14), Elliott served as the program’s running backs coach. When Chad Morris left for SMU after the 2014 season, Elliott was promoted to co-offensive coordinator.

Elliott served as the running backs coach and co-offensive coordinator for five seasons (2015-19), which included two national titles for Clemson.

Ahead of the 2020 season, Elliott was named the team’s sole offensive coordinator, following the departure of Jeff Scott (USF). Prior to the 2021 season, Elliott received another bump: he was named an associate head coach.

Elliott was also a candidate for the Duke head job, too, following the departure of David Cutcliffe. That search remains ongoing — now without Elliott.

Initially, Virginia search seemed likely to land on Penn State assistant coach Anthony Poindexter, who played at Virginia in the 1990s and then was a part of the program as an assistant for a decade (2003-13). That, however, changed and Elliott seemingly became The Guy in Charlottesville.

Sources: #Virginia’s coaching search, which had been focused on #PennState assistant Anthony Poindexter, could be pivoting. #Clemson OC Tony Elliott and possibly others still involved here, as @ByPatForde reported. Duke has already spoken with Elliott about its job, per sources.