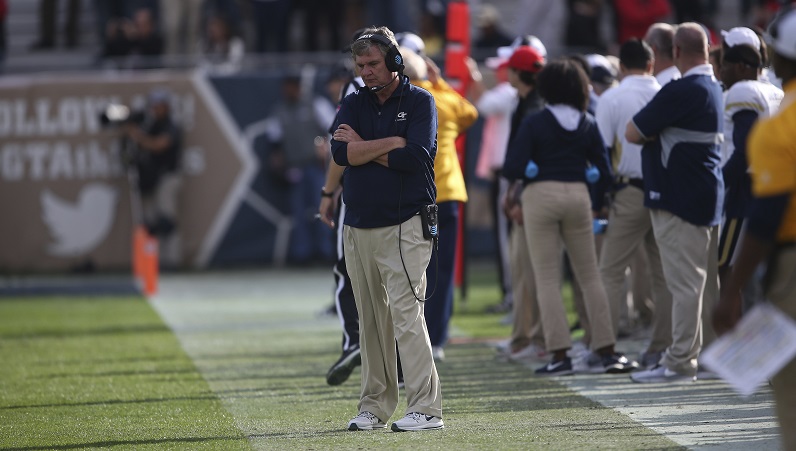 According to a report from Jeff Schultz of The Athletic, Georgia Tech football coach Paul Johnson plans to retire. Johnson has coached Georgia Tech since 2008. Georgia Tech is 7-5 this season, but coming off a 45-21 blowout loss to Georgia.

Paul Johnson is indeed retiring, a source tells me. @TheAthleticATL

Bill Shanks of 93.1 FM in Macon, Georgia was right there with the report, too.

Sources have told me that Georgia Tech football coach Paul Johnson will retire from coaching. Johnson has been at Georgia Tech since 2008. He compiled a 82-59 record in his 11 years on the job. Georgia Tech will be looking for a new head coach.

During his 11 seasons with the Yellow Jackets, Johnson’s teams went a combined 83-59. In his tenure, Tech had only two losing seasons. While at Georgia Tech, Johnson had two 11-win seasons, both of resulted in Orange Bowl appearances.

Prior to his time on The Flats, Johnson was the head coach at Navy from 2002-07. During that time, he won nearly 61 percent of his games: 45-29. Johnson, who hails from the mountains of North Carolina, spent several seasons (1997-01) as the head coach of Georgia Southern, too.

Known for his option offense, Johnson’s teams were a rarity in the Power Five — run heavy, in a class to themselves. Georgia Tech led the ACC in rushing every season under Johnson.

There is no word yet (to my knowledge, at least) as to whether or not Johnson will coach Georgia Tech in its upcoming bowl game.

Travis Etienne of Clemson is named ACC Player of the Year