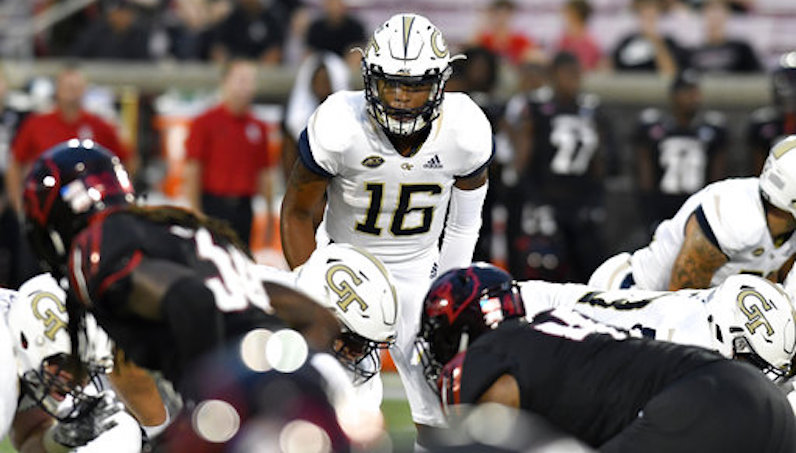 Georgia Tech quarterback TaQuon Marshall (16) shouts to his team during the first half of an NCAA college football game against Louisville, Friday, Oct. 5, 2018, in Louisville, Ky. (AP Photo/Timothy D. Easley)

Last Friday night in Louisville was an endless layup line for the preeminent go-go triple option attack in college football. Georgia Tech threw down the gauntlet on an overwhelmed Louisville team: 542 rushing yards — second most at Georgia Tech under Paul Johnson — and eight touchdowns.

In the 66-31 victory, the Yellow Jackets averaged 8.3 yards per carry and ran for at least five yards on 73 percent of their 65 carries, according to Football Study Hall. Georgia Tech threw the ball just twice in the win over Louisville; it was the first time since the 2000 season that a Power Five team has attempted two or fewer passes in a game.

At this point of the season, Tech is yet to defeat an actual good team; however, the offense looks like a Paul Johnson dream.

According to Football Study, Georgia Tech has an Opportunity Rate of 60.7 percent. This means: on nearly 61 percent of their run plays, Tech has gotten at least five yards on the ground. That’s good for No. 2 in the nation. (Over the last three seasons, that rate has hovered between 40-44 percent.)

There’s more, though: Georgia Tech’s offense has a Stuff Rate (the percentage of run plays stopped at or behind the line of scrimmage) of 11.1 percent — fifth best in the FBS.

Combine those two numbers together — Tech is rarely losing yards on the ground and is usually getting 5+ yards per carry — and you get an offense that’s routinely on schedule. The Yellow Jackets ranks second in the FBS in Success Rate (57.6 percent), which measures the percent of plays that an offense has success — measured by gaining 50 percent of necessary yardage on first down, 70 percent on second down, and 100 percent on third and fourth down.

An endless supply of parts: forward passes be damned

Quarterback TaQuon Marshall is the trigger man for Johnson’s wishbone attack, and he runs the offense to a tee. Marshall leads the ACC with 111 carries, and ranks inside the top five with nine rushing touchdowns.

Tech’s quarterback officially has 557 rushing yards on the season, but if you add yardage lost from sacks back in, Marshall has 597 yards on 105 carries — nearly six yards per pop.

However, Marshall isn’t the only one that presents danger; Tech’s option has plenty of…options.

In the ACC, there are currently 32 players that have so far — in the 2018 season — run for at least 115 yards and at least two touchdowns on a minimum of 115 carries. Of that group, seven play for Georgia Tech, easily the most of any ACC program.

The Matchup with Duke

Dating back to their first matchup in 1933 (when the wishbone was all the rage!), Georgia Tech and Duke have faced one another 85 times. The Yellow Jackets have come away victorious 51 times; between 1995 and 2002, Tech won eight straight games. Starting again in 2004, Georgia Tech won 10 straight.

However, over the last four years, Duke has won three out of the last four matchups. In those three losses, Tech has run for a combined 732 yards on 153 carries (4.78 yards per carry) and six touchdowns.

So far in 2018, Duke’s rush defense has allowed 122.8 yards per game — 3.3 yards per carry. Opponents have an Opportunity Rate of 43.4 percent and a Stuff Rate 19.9 percent against Duke, per Football Study Hall.

There’s a good chance that Saturday’s key ACC Coastal Division matchup in Atlanta will be decided along those lines. Can Georgia Tech run the ball with success? They will certainly try.

If Miami football is to run the table, its defense must continue to set the table