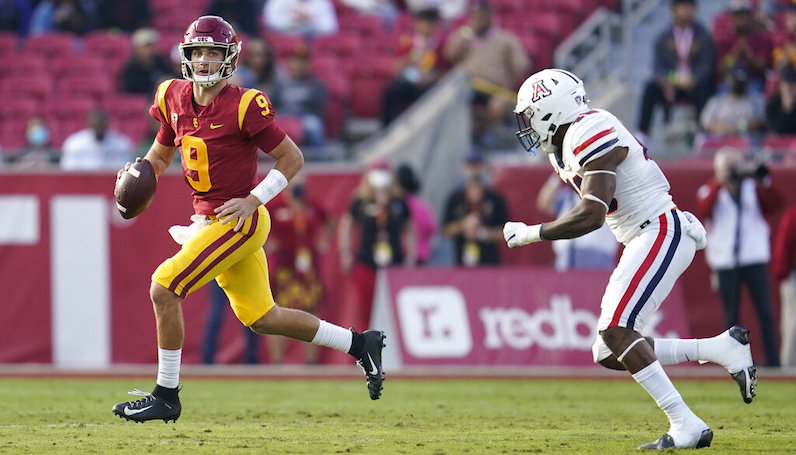 Former USC quarterback Kedon Slovis will transfer to Pittsburgh, according to multiple media reports. This is a big get for the Panthers and head coach Pat Narduzzi; Slovis was one of the top offensive talents in the transfer portal.

Slovis, a 3-star prospect in the 2019 recruiting class, burst onto the scene as a true freshman. During the 2019 season, Slovis threw for 3,502 yards, 30 touchdowns and only nine interceptions. That year, Slovis was one of the top rookie FBS quarterbacks — along with UNC’s Sam Howell.

In the shortened 2020 season for Pac-12 programs, Slovis completed 67 percent of his passes, while throwing for 17 touchdowns and 1,921 yards in six games.

The 2021 season was a disappointing one for the Trojans. Slovis battled injuries; Jaxson Dart, another freshman quarterback and the 2020 Gatorade National Football Player of the Year, stepped in and played a bunch.

Slovis entered the transfer portal last week, which came about two weeks after Lincoln Riley was hired by USC, away from Oklahoma.

For the Panthers, this means a big-time talent — and possible Kenny Pickett replacement — will land in town next year, likely with an excellent group of wide receivers. Currently, there’s very little experience on the roster behind Pickett.

It’s also a testament to the work put in by Narduzzi and former offensive coordinator Mark Whipple. Quarterback prospects will take note of Pickett’s development — from unheralded recruit to Heisman Trophy Finalist and the 2021 ACC Player of the Year.

This also marks the second time in five years that a USC quarterback has transferred to play for Pitt and Narduzzi. Max Browne did the same thing back in 2016. Browne was a senior on the 2017 Pitt team, Pickett’s freshman season.

Pickett will sit out bowl game, prepare for the 2022 NFL Draft