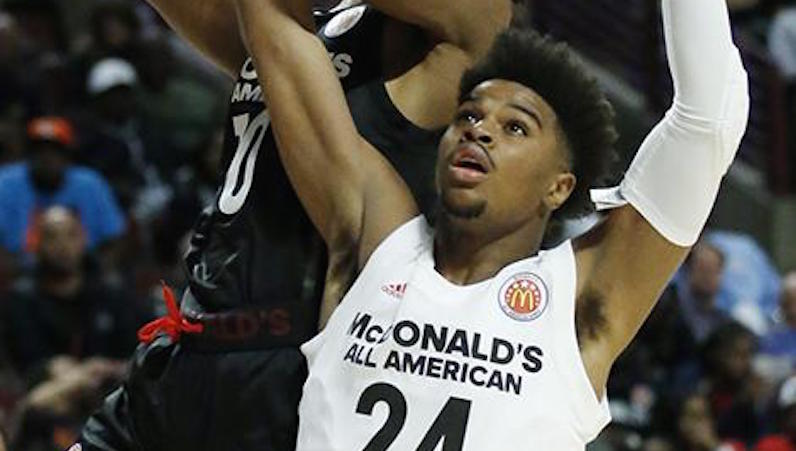 Nam Y. Huh/APBig East's Collin Sexton, of Mableton, drives to the basket against Big West's MJ Walker, of Jonesboro, during the second half of the McDonald's All- American boys high school basketball game in Chicago, Wednesday, March 29, 2017. (AP Photo)

On the hardwood, Florida State looked to be a team with the potential to get back to the NCAA Tournament after reaching the dance for the first time in five years this past season.

After M.J. Walker committed to the Seminoles in late May, those hopes became much more of a reality.

Walker is a 5-star prospect (by some services), a top-30 national player, according to the 247Sports Composite rankings and a McDonalds All-American. Considering that Florida State is losing its top three leading scorers, who all declared early for the NBA Draft, Walker was just what the Seminoles needed.

At 6-5 and 205 pounds, Walker already possesses a Division I body and is a natural scorer. As a high school senior last season, he averaged nearly 27 points per game after leading his Jonesboro team to a state championship in each of the previous two years.

How Walker meshes with a group that returns eight scholarship players and how well he plays on the defensive end will ultimately help determine how much Walker plays, but expect the numbers to be plentiful, especially with the need for offensive production.

If one had to predict at this point, Walker is probably the odds-on favorite to lead the Seminoles in scoring this season. The leading returning scorer for FSU is slasher Terance Mann, who averaged 8.4 points per contest last season. The only other returning player to average more than five points is PJ Savoy, who averaged 5.5.

What does he do best?

Walker is a natural scorer with a smooth shooting stroke and very good range. His game however, is not limited to what he can do on the perimeter. Walker is aggressive when it comes to attacking the basket and usually attempts to finish with authority.

Despite his ability as a scorer, Walker is an unselfish player with the ability to create for others. At 6-5, Walker has good size for a guard and should also be able to help with the rebounding some, too. The biggest question will be how well Walker defends against some of the ACC’s best guards.

One interesting aspect that Walker brings to the table is that the Seminoles could continue their two-year trend of trying to push the ball up the court. For most of head coach Leonard Hamilton’s tenure, FSU has been a half-court offensive team.

With FSU losing its top three and four of its six leading scorers, the Seminoles may have had to revert to more of a half-court offense with so proven scorers returning. With Walker being able to fill that void and good athletes such as Mann, Trent Forrest and CJ Walker coming back, Florida State just might have the horses to get up and down the court once again.

How Walker adapts to the college game remains to be seen, but if he comes close to living up to his potential, he should be an All-ACC Freshman team selection and maybe much more.

Prior to the 2015-16 season, FSU had never had a player declare after the NBA after just one season. Following that year, guard Malik Beasley made the jump and Jonathan Isaac recently did likewise, becoming the highest FSU player drafted since Dave Cowens went fourth overall to the Boston Celtics in the 1970 NBA Draft.

If Walker lives up to his expectations, he could be the Seminoles’ third “one-and-done” in as many years.

A Special Specialist: 5 stats that demonstrate the effectiveness of PJ Savoy