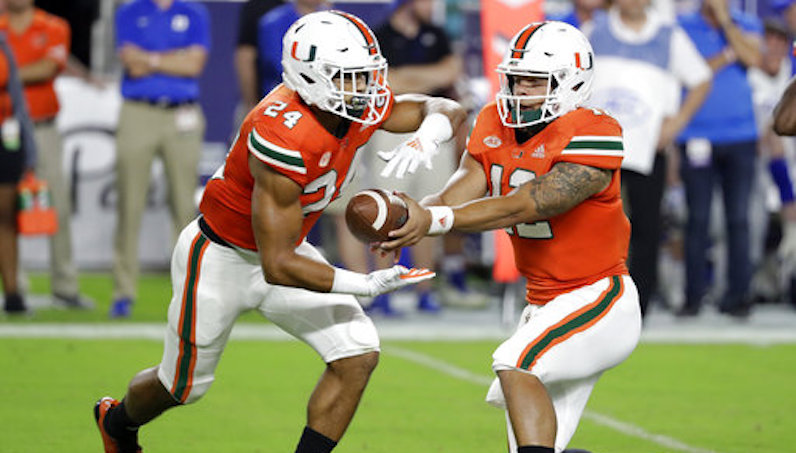 Miami quarterback Malik Rosier, right, hands off to running back Travis Homer (24) during the first half of an NCAA college football game against Duke, Saturday, Nov. 3, 2018, in Miami Gardens, Fla. (AP Photo/Lynne Sladky)

Miami’s leading rusher didn’t participate in practice on Tuesday. According to a report from the Miami Herald, running back Travis Homer spent time on an exercise bike with an elasticized brace over his left calf. Head coach Mark Richt described the injury as a stained calf, but said Homer should still play this week against Georgia Tech.

UM RB Travis Homer has strained calf, but Richt said he should be good for Georgia Tech.

Homer leads Miami in several rushing categories, including carries (123) and yards (702, sixth in the ACC). According to Football Study Hall, has averaged a solid 6.1 Highlight Yards per Opportunity, too. This past Saturday in the home loss to Duke, Homer ran for 133 yards and a touchdown.

During Monday’s practice, sophomore back DeeJay Dallas — an explosive and elusive rusher — took reps with the first team offense.

Miami started the season ranked inside the AP top 10; as recently as four weeks ago, the Hurricanes were still ranked 16th in the FBS. However, sit at just 5-4 (2-3 in the ACC) and will have to fight for bowl eligibility.

Football Study Hall favors Miami in all three of its final regular season games — two of which come on the road, though, including this Saturday at Georgia Tech.