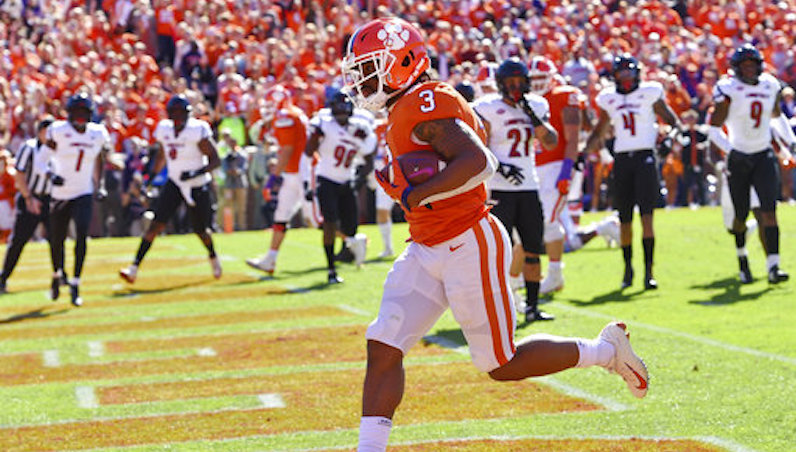 Clemson's Amari Rodgers runs in for a touchdown during the first half of an NCAA college football game against Louisville, Saturday, Nov. 3, 2018, in Clemson, S.C. (AP Photo/Richard Shiro)

As the 2018 college football regular season heads into its homestretch, let’s take a look at this week’s ACC Football Power Rankings. Clemson is very good. Louisville is not very good. They are the yin and yang of the league. In between those two programs, which played this past week, find out where every other team landed.

Since escaping a scare at home against Syracuse, Clemson has been on a bit of a heater. The Tigers have ripped off four straight wins with a point differential of +204 (240 points for, 36 points against). One week it’s Trevor Lawrence throwing for 300+ yards and four touchdowns; the next it’s Travis Etienne, Tavien Feaster and Lyn-J Dixon leading a Clemson rushing attack that went for 492 yards and five touchdowns against Louisville.

Oh, and the defense has been pretty good, too. This team is a machine.

Tanner Muse was stingy in coverage against the Cards today. pic.twitter.com/CuHe1UFDe8

Going back to the 2000 season, only three ACC league games have ended with one team winning by 60+ points, according to Sports Reference. The 2018 Clemson Tigers account for two of those three performances.

The dream season continues for Dino Babers and Syracuse — ranked No. 13 in the latest AP Poll, the program’s highest ranking since 1998. Freshman kicker Andre Szmyt continues to light it up, too; after the win over Wake Forest, Szmyt is now a perfect 46-of-46 on PAT and 23-of-25 field goal attempts (92 percent). Szmyt leads the ACC in scoring, field goals and field goal percentage.

Jakobi Myers had a strong outing for the Pack as they took down the Seminoles. pic.twitter.com/sV9Tyjmed4

Boston College is low-mistake team. The Eagles, at the behest of Steve Addazio, avoid turnovers and play tough football. AJ Dillon (128.1 rushing yards per game) left the Virginia Tech game with another ankle injury; this team desperately needs him on the field for this week’s big matchup with Clemson.

After a slow September, Pitt football has turned its season around; after a win over Virginia last Friday, the Panthers are in the driver seat for the Coastal Division, amazingly. Qadree Ollison has led this team out of the backfield this season, but on Friday, Darrin Hall was an absolute stud: 19 carries, 229 yards and three touchdowns. Hall now has two games in his career with at least 220 rushing yards. (James Conner hit that benchmark three times.)

Penalty yards —10 flags, 80 yards, abnormally large numbers for the Cavs — and poor running defense proved costly for Virginia in the loss against Pittsburgh. UVA hasn’t won seven or more games in a season since 2011. That can change this weekend against Liberty.

It wasn’t pretty — just 290 yards of total offense — but Duke got the job done at Miami. Duke will now go bowling for the sixth time in the last seven seasons.

What…what happened to this team? Miami has a very good defense, but the offense continues to sputter, and that starts at the quarterback position. This past Saturday was no different: Malik Rosier and N’Kosi Perry combined to go 13-of-28 through the air (46.4 completion rate) for 111 yards (less than four yards per attempt). That’s just not good enough.

Georgia Tech was again attempted two or fewer passes in a game and won by two or more scores; this team North Carolina fell victim. Tech went for 461 yards on the ground — plus four touchdowns — and the defense came to play, too. The Yellow Jackets intercepted Nathan Elliott three times.

Since the 2008 season, when Paul Johnson arrived at GT, ACC teams have 39 games have at least 400 rushing yards and three rushing touchdowns. Georgia Tech accounts for 26 of those games.

An up-and-down season for the Hokies took another turn last week with the loss to Boston College. Virginia Tech is now 4-4 (3-2 in the ACC); since the calendar flipped to October, Justin Fuente’s club has just one win — a three-point victory over 1-7 UNC.

Next up: at Pittsburgh

While James Blackman provided some spark through the passing game — a career day with 421 yards and four touchdowns — a rough season added another chapter with a loss at NC State. Everything is just too easy against the Seminoles; NC State moved the ball with ease — on the ground or in the air. As has been the case all season, too, FSU simply can’t run the ball behind that offensive line: 2.38 yards per carry, second worst in the FBS.

Next up: at Notre Dame

After jumping out to a 10-0 first quarter lead, homecoming quickly went south for Wake Forest against Syracuse. The loss of freshman quarterback Sam Hartman is a tough hit, too. If only this team could play Louisville every week.

Sam Hartman missing Thursday night's game at N.C. State is going to make him the 38th scholarship player to miss a game for Wake this season.

He's the 12th player lost for the year to injury.

Nathan Elliott — after a couple nice games against Syracuse and Virginia — crashed back to Earth: three interceptions against Georgia Tech, and under five yards per pass attempt.

Louisville hasn’t won a game since the middle of September, and with the next three games against top-25 teams, it’s hard to foresee if there’s another one coming this season. Still winless in ACC play, the Cardinals have been outscored by 163 points (27.2 per game) in six conference games.