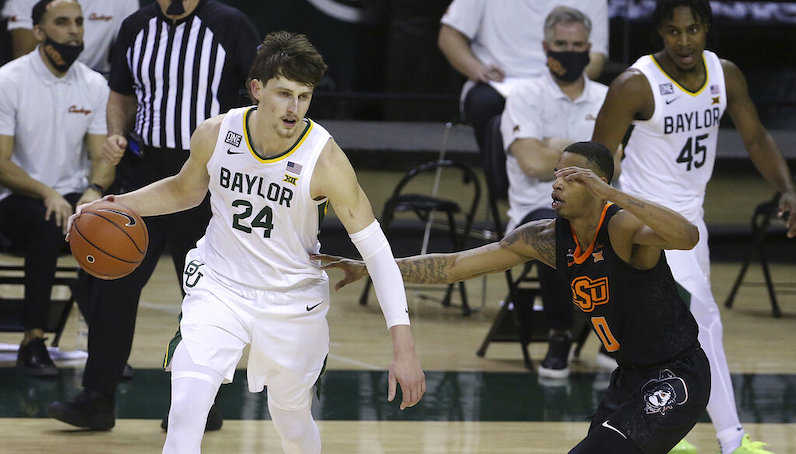 Matthew Mayer spent the last few weeks as one of the top player considering both the 2022 NBA Draft and the transfer portal. Over the weekend, Mayer announced that he’ll withdraw from the draft. Mayer, however, is unsure where he’ll play next season.

After four years of Baylor, including his role as a part of the 2021 National Championship team, Mayer is poised to move elsewhere. So far, he’s received interest from plenty of programs, including a plethora of national programs: North Carolina, Illinois, Alabama, Arkansas, USC, Memphis and Texas Tech.

The hypothetical fit at UNC for Mayer is really good. The 6-foot-9 Mayer is a wing/stretch-4 with a lot of two-way versatility. Hubert Davis could copy-and-paste Mayer right into the starting power forward spot, as the one-year replacement for Brady Manek.

During his four seasons at Baylor, Mayer appeared in 126 games (33 starts); he scored 865 points, grabbed 400 rebounds and drained 111 3-pointers (34.5 3P%). Finally, Mayer joined the starting lineup this season for the Bears. Mayer averaged a career-best 9.8 points per per game. Despite playing more, though, Mayer’s usage rate actually dropped — from 24.8 percent in the 2020-21 season to 21.1 percent this season.

Obviously, North Carolina will have some stiff competition to land Mayer. With that said, the Tar Heels have a lot to offer: a starting role for a team that returns four starters and, just six weeks ago, was playing in the Final Four. Davis and North Carolina’s staff can sell Mayer with the success and role of Manek, while working in concert with All-ACC center Armando Bacot.

Mayer isn’t the same caliber of shooter as Manek. However, Mayer still offers some stretch (career 34.5 3P%) to the frontcourt. Plus, with UNC’s ability to scheme shots or have wide-open looks created by RJ Davis, it’s reasonable to assume that Mayer would get whatever he wants from deep. Mayer is also a crafty off-ball mover, one that can finish with some pop at the rim, too.

Moreover, he’s a matchup problem. Mayer can do more than stretch the court. He can play with the basketball, too, attacking off the dribble and looking for pull-up jumpers.

Scouting Report: Pete Nance, plus more on his impact as a half-court handoff hub