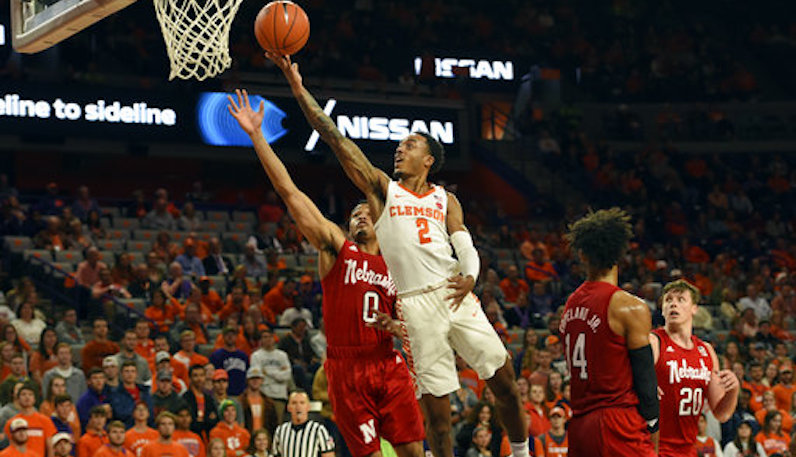 Clemson's Marcquise Reed drives to the basket to score while defnded by Nebraska's James Palmer Jr. during the second half of an NCAA college basketball game Monday, Nov. 26, 2018, in Clemson, S.C. (AP Photo/Richard Shiro)

Earlier this week, in Clemson’s 65-60 win over St. Peter’s, star guard Marcquise Reed injured his knee. The injured occurred late in the game for Reed, who led Clemson with 21 points. On Wednesday, an MRI revealed that the injury is a sprain — as opposed to something far worse. According to Grace Raynor of the Post and Courier, Reed is questionable for Saturday’s matchup with Mississippi State.

Marcquise Reed has a sprained knee. Clemson's leading scorer is questionable for Saturday.

So far this season, Reed has been the main driver of Clemson’s offense, which ranks 45th in KenPom’s adjusted efficiency rating. With a massive usage rate of 30.8 percent (second in the ACC), Reed averages 19.4 points and 5.3 free throw attempts per game (83.3 FT%). He’s also handed out 3.4 assists per game — or 5.8 per 100 possessions.

This weekend’s matchup between Clemson and Mississippi State will take place in Newark, New Jersey; tip-off is set for 4 p.m. on Saturday.

Tigers land at No. 8 in this week’s ACC Basketball Power Rankings