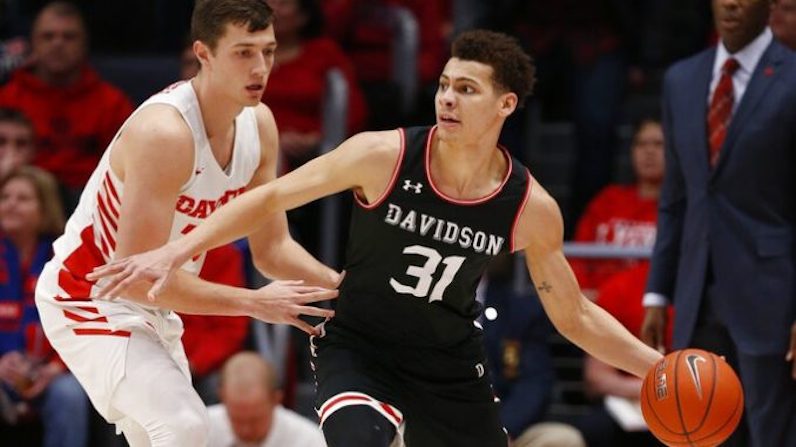 The 2021 offseason for college basketball is shaping up to be a historical period of player movement. With nearly 1,000 names already in the transfer portal, it doesn’t take a genius to infer that roster management is more important now than ever before.

At this point, it’s hard to get a great sense of what any ACC roster will look like. A team could lose or add a couple players at any given time. This will obviously be something to monitor throughout the next few months.

The goal of this space will be to shine a light on key transfer targets from outside conferences that should be on the minds of ACC teams and fans. It’s not realistic to go through every option; there are simply too many to list out. However, here are a couple of names to consider — starting with guard creators and scorers.

There isn’t a more accomplished scorer in the transfer market than Kellan Grady. It’s that simple. During four seasons in Davidson’s spotless motion offense, Grady scored 2,002 points. Grady averaged better than 17 points per game in each season he spent in a Davidson uniform.

According to Synergy Sports, Grady scored 1.01 points per possession this season coming off screens (55.7 eFG%). Grady has a high release on his jumper; he also does a wonderful job squaring his lower body to launch on tough catch-and-shoots.

At 6-foot-5, Grady is big and experienced. He’ll be 24-years-old by the time the 2021-21 season starts. Grady is known as a 3-point bomber; nearly 53 of his field goal attempts this season were from beyond the arc. However, Grady shot above 62 percent at the rim this season: over 60 percent of those makes came unassisted.

Grady can get to the rim and finish. On this possession, Grady — covered by Shakeel Moore, a potentially elite POA defender — gets all the way to a rim for a layup out of Davidson’s 21 action.

While Grady has the ability to generate offense for others (career 13.1 percent assist rate), he may be better suited for a secondary creation role — or at least one that isn’t straight spread pick-and-roll. Remember: he’s spent his entire college career in a heavy motion offense. Regardless, he’ll be tasked with some role as an offensive initiator, which should benefit whatever roster he lands on.

Of course, Grady is an excellent off-ball weapon, too: 1.26 points per spot-up possession this season, according to Synergy.

The ideal role for Grady should be some mixture of on-ball creation — without overtaxing — and movement activity away from the ball as well.

Teams that are in the hunt for shooting and efficient offensive production in the backcourt should monitor Carter Collins.

Collins, who hails from Chapel Hill, played in 110 games, including 50 starts, at Davidson. As a junior and senior, Collins took on a larger role for the Wildcats; he averaged 10.4 points per game across those two seasons, while shoot 51.5 2P% and 36.8 3P%.

Noah Locke could emerge as a priority target for teams in the market for spot-up shooting. Locke is a little limited in terms of overall impact; the 6-foot-3 guard is limited in terms of self-creation and rarely gets to the line: 1.5 FTA per 40 minutes this season. Locke, however, is out there to shoot the ball from deep and he’s willing to play that role.

A career 40-percent 3-point shooter, Locke isn’t bashful about letting it fly. While appearing in 92 games at Florida (79 starts), over 68 percent of his field goal attempts came from beyond the arc: 12.5 3PA per 100 possessions.

According to Synergy Sports, Locke has connected on 40.3 percent of his career catch-and-shoot 3-point attempts.

You can copy and paste shooters like Locke on any roster. He’ll help.

While primarily a spot-up threat, Locke has some pull-up shooting capabilities: 40.9 eFG% on off-dribble jumpers the last two seasons, per Synergy. Locke has a little pull-up game to counter hard closeouts in the half court.

Locke drained 135 3-pointers combined as a sophomore and junior with the Gators. Only six of those 3-pointers came unassisted, though.

During this stretch, Locke shared backcourt duties with two very good on-ball creators: Andrew Nembhard, now a key piece of Gonzaga’s beautiful machine, and Tre Mann, who projects as a top-25 pick in this year’s draft.

Florida Chin pick-and-roll for Tre Mann — who gets middle vs. Oral Roberts coverage + no-look pocket pass to Duruji for the spike. Gators: 1.2 PPP with Mann as PnR passer to a teammate that finished the possession pic.twitter.com/aQzZOMS4Ae

Locke is best served as a spot-up weapon, but there may be more untapped secondary scoring capabilities. If so, great. If not, well, a low-mistake wing that makes 40 percent of his 3s is an easy add.

As of Sunday (March 28), 16 schools had already reached out to Locke.

One of the under-the-radar shooters in the transfer portal hail from the Big South: Josh Corbin of Winthrop.

As the top 3-point marksman for go-go Winthrop, Corbin focused on spacing the floor for the Eagles relentless attack, which blitzed the Big South. Nearly 87 percent of Corbin field goal attempts came from beyond the arc: 47-of-116 3PA (40.5 3P%).

Corbin can shoot on the move with big-time range and a quick trigger: 18.2 3PA per 100 possessions.

For the season, Corbin played just 14 minutes per game, though, as former Winthrop coach Pat Kelsey — now at Charleston — rotated his lineups liberally.

Phlandrous Fleming is a power guard that can basically do everything. While carrying one of the least efficient teams in the country, Fleming put together a monster senior season.

Fleming, who averaged 20.1 points per game, was one of eight players with 30 percent usage, 20 percent defensive rebound rate and 15 percent assist rate. Fleming scored, rebounded, defended and created offense for others.

Going back to the 2007-08 season, there only 17 players have posted a season with 30 percent usage, 20 percent defensive rebound rate, 15 percent assist rate, two percent steal rate and two percent block rate. Fleming hit those benchmarks twice — in each of the last two seasons.

Fleming frequently had to break out his Do-It-Yourself kit this season for the Bucs. Over 81 percent of his 2-point field goals (45 2P%) came unassisted, while 30 percent over his 3-pointers (32.2 3P%) were also unassisted.

Slot Fleming on a roster with more talent and his usage will obviously drop; with this, however, his efficiency as a scorer should jump. The shot creation is there, too. If you need a late-clock bucket, Fleming can get to the rim (5.7 fouls drawn per 40 minutes) or stick a pull-up jumper.

There’s interesting shot diversity to his game as well. Fleming can run pick-and-roll and isolate 1-on-1. He has the first step and balance needed to be an effective catch-and-go/second-side player.

On top of that, at 6-foot-4, 210-pounds, Fleming can also post-up. Fleming scored 1.08 points per post-up possession this season, according to Synergy. Working down in this mid-post area allows Fleming to look for his own offense or create for others.

Lander appeared in 26 games. While on the floor, though, Lander was turnover-machine (29.1 TOV%) who couldn’t hit a jumper. Lander shot 23.1 percent on 2-point attempts and 27.3 percent on 3-point attempts.

The Evansville native was a consensus top-25 prospect in the 2020 class. Lander also took an official visit to Louisville back in Sept. 2019. Of note, though: former Louisville assistant coach Luke Murray led Lander’s recruitment. Murray’s contract, however, won’t be renewed for the 2021-22 season.