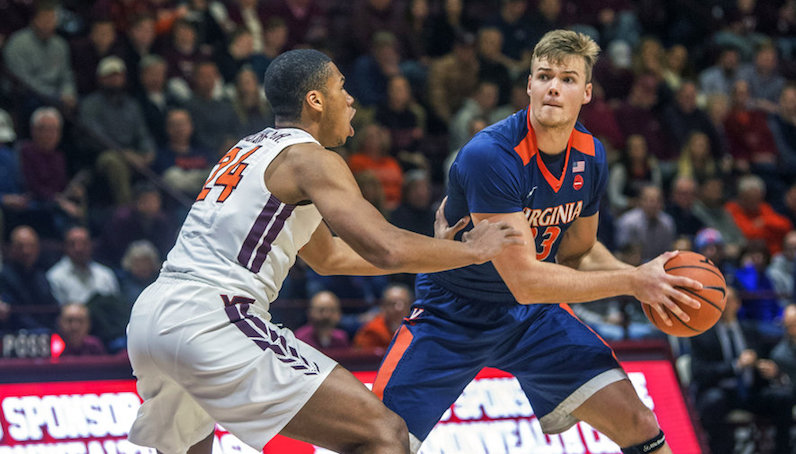 There are multiple reasons Virginia is significantly better this season, especially on offense.

Kyle Guy is a more diverse and consistent shooter; Devon Hall is getting more opportunities to shine. Ty Jerome and De’Andre Hunter provide length in the backcourt and create more matchup problems than London Perrantes and Darius Thompson did in similar roles last season.

But one major, deceptive difference is the offensive improvement of redshirt junior center Jack Salt.

But Salt’s contributions offensively have always been difficult to see with basic statistics, yet it’s hard to deny Virginia’s offense has been better with Salt on the floor, last year UVA went 9-2 when the big New Zealander played at least 20 minutes, that includes a loss at Villanova which might have actually been the best game the Cavs played all season.

This season, it’s no coincidence the Cavs are 15-1 and Salt is averaging a career-high 21 minutes per game.

Salt has always made the Virginia offense flow with actions that don’t show up on a stat sheet. If the ACC handed out an award for best screener, Salt would be as big a lock as teammate Isaiah Wilkins is to win Defensive Player of the Year. He also has a knack for keeping possessions alive with well-timed tip outs to teammates.

But it’s more difficult to see that Salt has become more skilled all around. He’s never going to be a scoring machine, but his hands and shooting have improved enough to keep opposing defenses honest, which has led to increased open looks for teammates on the perimeter.

Salt, who quietly battled a bad back much of last season, is more explosive and dunking shots he would have tried to bank in a year ago. The result is a field goal percentage that has improved nine points to 67 percent; he may not finish with enough attempts to rank at the top of the league, but right now that would place him third in the ACC.

According to KenPom, Salt ranks No. 71 nationally in field goal percentage on two-point field goal attempts. The more efficient Salt becomes as a scorer, the more effective of a screener he becomes, too. If defenses have to pay more attention to him for he screens for, say, Kyle Guy, then that may give Virginia’s top shooter another half-second to get open beyond the arc.

He’s shooting just 52 percent from the foul line, but that’s an improvement of four percentage points.

All-in-all, Salt is doing a fantastic job converting on the easy looks that come his way and the Cavaliers are benefiting. UVA is averaging 71 points per game, compared to 66 last season and shooting slightly better percentages from the field and behind the three-point arc. The Cavaliers rank 32nd nationally in adjusted offensive efficiency, too: 114.5 points per 100 possessions.

Looking past the per game averages it becomes easier to see why Tony Bennett has gone with Salt as a full-time starter for three seasons despite just two career double-figure scoring games.

Welcome to the ACC, De’Andre Hunter