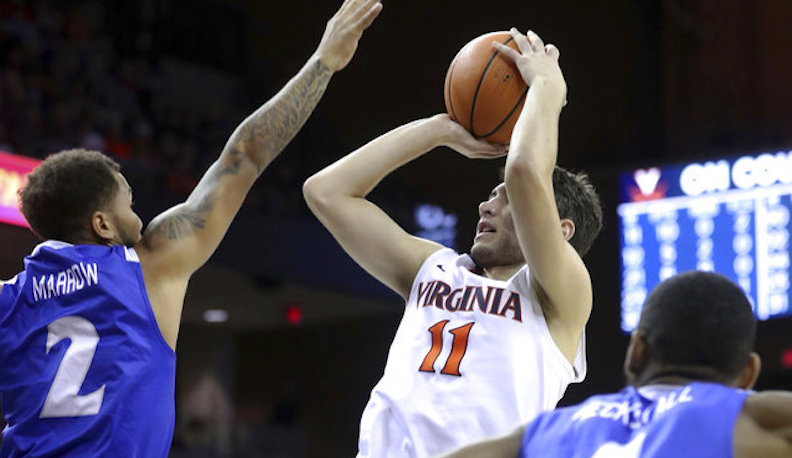 If there was any real concern for Virginia in the first few weeks of the season, it might have been the slow offensive start for sophomore guard Ty Jerome.

But Jerome busted out in a big way, just in time for the start of ACC play with a career-high 31 points in a win over Boston College. He followed it up with 13 points and five assists at Virginia Tech and has now scored in double figures in four straight games.

The Cavs suddenly look like a team that could win the ACC, particularly if the New York product at point guard keeps playing the way Wahoo fans have believed he could since taking over the late stages of last season’s game at Villanova.

So what are reasonable expectations for Jerome going forward? For a variety of reasons, there probably won’t be too many more 30-point explosions for Jerome this season; the Cavs tend to share the ball too much for any one player to dominate with frequency.

But even with the early struggles, Jerome is now averaging 10 points and three assists per game. After an offseason of wondering about UVa’s point guard status, it isn’t crazy to think Jerome can top wind up topping the production of his predecessor London Perrantes, who averaged 12.4 points and 3.8 assists last year.

At 6-foot-5, Jerome has a height edge on a lot of point guards, and he’s used it to get into the lane, where he’s been able to get his own shot or lob to Virginia’s big men.

But the biggest difference the past few games might be the looks he’s getting from the outside. While backcourt mate Kyle Guy has a lightning-quick release and is deadly accurate on fade-away jumpers, Jerome is more of a set-shooter.

His size has been allowing Jerome to get square and get shots off even with defenders in the vicinity. And as his confidence has improved, so has his range, with Jerome routinely hitting shots well beyond the 3-point arc.

That’s opening up the paint for the Cavaliers big men to get easy looks. Case in point, in the second half at Virginia Tech, Jerome broke through the Hokies full-court trap on the dribble and Tech defenders became so concerned with Jerome pulling up for a shot they left Jack Salt alone under the basket for an easy dunk.

The Cavs’ lone loss, at West Virginia, exposed how UVA can struggle if Jerome is off. But he’s been switched on as of late and is potentially the key for Virginia with North Carolina coming to town Saturday.