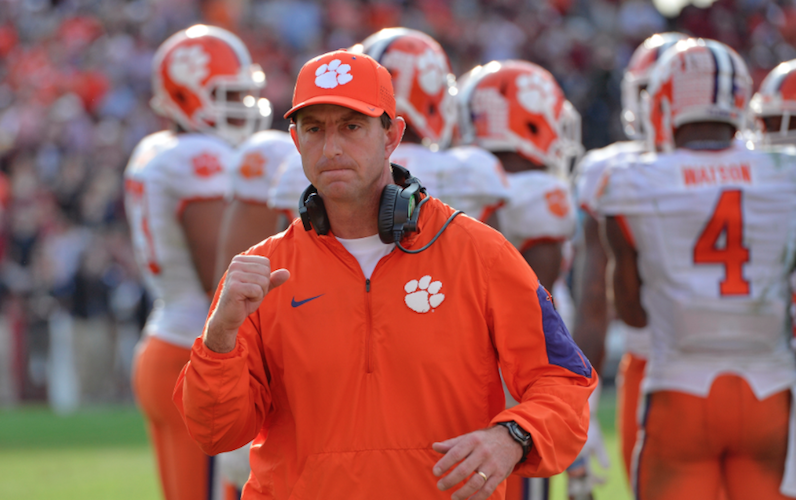 Dabo Swinney and his staff made another recruiting splash on Saturday. (AP Photo)

Clemson continues to strike gold on the recruiting trail as one of the nation’s most coveted defensive ends pledged to the Tigers over the weekend.

Xavier Thomas, a native of Florence, S.C., who attends IMG Academy in Bradenton, Fla., chose Clemson over South Carolina and many others. Thomas pledged to Clemson on Saturday during his visit for the annual spring football game in Death Valley.

Biggest decision of my lifetime, my recruitment is OVER. I'm 100% ALL IN ‼️🐅🐾 This is only the beginning #WE2DEEP18 @ETitusThomas pic.twitter.com/RQJ7tr32BY

The 6-3, 265-pound Thomas is a 5-star prospect. He is the No. 2 overall prospect nationally in 247Sports’ composite rankings of the 2018 class. An athletic pass-rusher, Thomas frustrates opposing blockers with his power and quickness.

Clemson’s successful recruitment of Thomas continues a growing recruiting trend around the ACC. In essence, the Tigers are virtually picking and choosing who they want along the defensive line.

It’s not just in-state talents from South Carolina, such as Shaq Lawson, Albert Huggins and Nyles Pinckney. It’s more than North Carolina, where Clemson more recently has found Carlos Watkins and Dexter Lawrence. The Tigers are going up and down the East Coast to land elite defensive linemen. They’re going to New England (Christian Wilkins). They’re going to Georgia (Austin Bryant). And while Thomas is a native South Carolinian, they had to chase him down in Florida.

Clemson has been dipping into the Sunshine State for years in landing elite wide receivers. The list this decade alone includes Sammy Watkins, Artavis Scott, Ray-Ray McCloud and Deon Cain. But in the last three classes, the Tigers have made more headway recruiting Florida on the defensive side of the ball.

One of America’s top prep gridiron factories is IMG Academy, a school Clemson has become quite familiar with in recent recruiting cycles. Already in the 2018 class, Clemson has added Thomas and 4-star linebacker Mike Jones Jr. from IMG. In the 2016 class, the Tigers signed 4-star linebacker Shaq Smith out of the school.

Before this past weekend was through, Clemson also added an eighth verbal commitment in the rising senior class. That one came from Braden Galloway, a 6-6, 220-pound tight end from Seneca, S.C. Galloway is the No. 12 Palmetto State native in his class, per 247Sports’ composite rankings. He received a scholarship offer while on an unofficial visit to Clemson on April 5. Galloway returned for the spring game in Memorial Stadium on April 8 and became Clemson’s second commitment of the day.

So far, the recruiting snowball effect coming off of Clemson’s national championship is growing bigger with each passing month.

5 Clemson football players who will be tough to replace