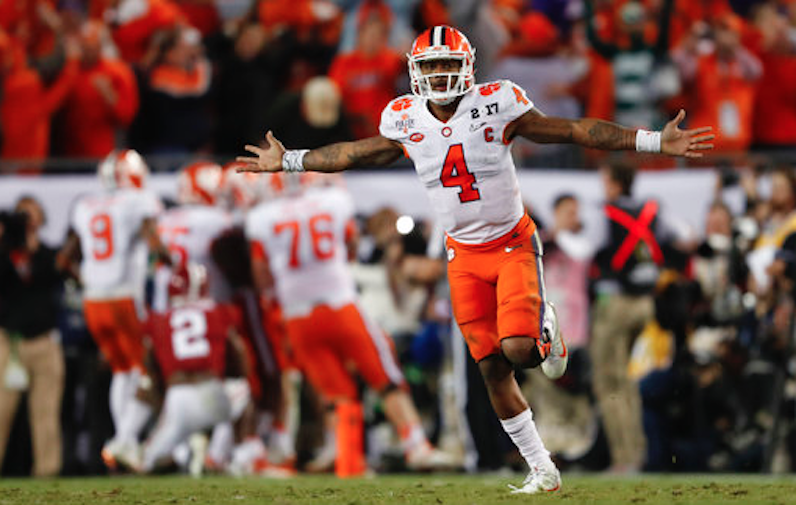 Deshaun Watson is one of several Clemson football players who the Tigers staff must replace. (AP Photo)

Coming off a dream season last fall, Clemson has numerous holes to fill heading into its 2017 campaign.

While Dabo Swinney’s Tigers will enter the season with an outstanding roster, several outstanding players have departed. Which of those players will be most difficult to replace?

As a 5-star recruit, Watson came to Clemson with extremely high expectations. And he fulfilled nearly all of them.

Watson became the first player in ACC history to twice finish in the top three of the Heisman Trophy voting. Though he didn’t win college football’s supreme individual award, he did win the Davey O’Brien Award twice. He also won 28 games his final two seasons, including Clemson’s first national championship since 1981.

Clemson has a variety of gifted quarterbacks eager to replace Watson. But they’ve got large shoes to fill.

Gallman could have rewritten Clemson’s rushing record books had he returned for his senior season. But after winning the national championship, he joined Watson and other teammates in declaring for the NFL Draft.

Clemson was a perfect 17-0 in those contests. The Tigers have other running backs, but Gallman’s combination of size and power isn’t easily replicated.

The linebacker had a knack for big plays. Whether it was a pick-six against Oklahoma in the Orange Bowl or his key pass breakup against Alabama this past January, Boulware always seemed to be in the right place at the right time.

Williams bounced back in a big way last fall from a broken neck that ended his 2015 season shortly after it began. With 98 receptions for 1,361 yards and 11 touchdowns, he was one of Clemson’s most productive players throughout its national championship run.

The Tigers have several promising receivers to choose from heading into 2017. But it may take a few of them to make up for what Williams produced all by himself in 2016.

Guillermo is the only offensive lineman graduating out of Clemson’s starting group. As the team’s first-team center for the last two seasons, he was one of the unit’s anchors.